Supreme Court Reacts Swiftly Regarding Protests at its Plaza 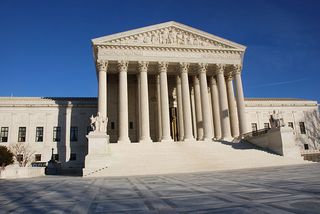 No person shall engage in a demonstration within the Supreme Court building and grounds. The term “demonstration” includes demonstrations, picketing, speechmaking, marching, holding vigils or religious services and all other like forms of conduct that involve the communication or expression of views or grievances, engaged in by one or more persons, the conduct of which is reasonably likely to draw a crowd or onlookers. The term does not include casual use by visitors or tourists that is not reasonably likely to attract a crowd or onlookers.

Importantly, the regulation addresses several of the issues Judge Howell found relevant in her decision.  First, it emphasizes "conduct" rather than simply wearing a t-shirt with a slogan or carrying a sign.  However, the regulation does seem to include "speechmaking" in this broad category of "like forms of conduct."  Second, the regulation requires this conduct as "reasonably likely to draw a crowd or onlookers."  This emphasizes the effect, but also implies some sort of intent requirement in the "reasonably likely."  Third, the regulation specifically excludes the "casual use by visitors or tourists."  This would presumably exclude the t-shirt wearing preschoolers that Judge Howell referenced in her opinion, as well as the solitary person arrested for wearing a jacket that bore the phrase "Occupy Everything."

Nevertheless, the Supreme Court's reservation for itself of making exceptions and the remaining prohibition of expression of "views" could certainly prompt serious First Amendment challenges to the regulation.

As for the statute and its constitutionality, this narrower regulation may indicate some level of agreement with a conclusion that 40 USC §6135 is overbroad and unreasonable.

Listed below are links to weblogs that reference Supreme Court Reacts Swiftly Regarding Protests at its Plaza:

They scrambled for some new text to use, and found it in the regulations for the sidewalk for the White House, although they applied the text to their plaza, and for some reason continue to feel the need to regulate the sidewalk.

I do not think that the proper balance has been struck for the plaza, and of course the ones who make the rules tend to make sure that their own interests are well served.