Second Circuit on True Threats, The First Amendment, and the Passive Voice

A divided Second Circuit panel upheld the conviction of Harold Turner in its opinion in United States v. Turner for threats in a blog post against Seventh Circuit Judges Easterbrook, Bauer, and Posner.  Turner objected to the judges' ruling in National Rifle Association of America v. Chicago holding that the Second Amendment was not incorporated as to the states (and municipalities), later reversed by the United States Supreme Court in McDonald v. City of Chicago. 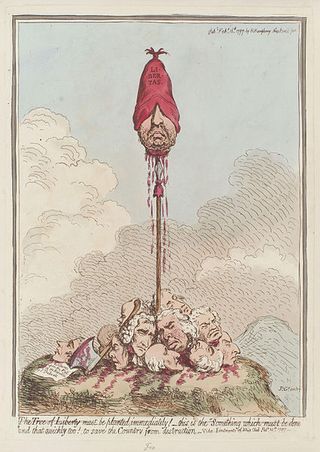 "The tree of liberty must be planted immediately!" circa 1797.
Turner's blog post contended that the blood of these judges would "replenish the tree of liberty" and that they should be made examples lest other judges not understand the message "Obey the Constitution or die."  Importantly, not only did Turner say that the judges "deserve to be killed," he posted "photographs, work addresses, and room numbers for each of the three judges, along with a map indicating the location of the courthouse in which they worked, and a photograph of the building modified to point out “Anti-truck bomb barriers.”"  Also importantly, Turner's blog included references to the killing of family members of United States District Judge Joan Lefkow in 2005.

The jury was instructed as to the First Amendment and nevertheless convicted.  The panel majority concluded "based on an independent review of the record that the core constitutional fact of a true threat was amply established, and that Turner’s conduct was unprotected by the First Amendment."

Among Turner's arguments that his blog statements did not constitute a "true threat" was his use of the passive voice.  For the majority, this was overly technical and belied the other statements regarding the location of these judges and the killing of another judge's family members.  Syntax could be important - - - but not here.

Dissenting Judge Rosemary Pooler - - - who, coincidentally, was a member of a Second Circuit panel (along with Sonia Sotomayor) holding that the Second Amendment was not incorporated against the states - - -carefully considered the "true threats" doctrine as compared to incitement/advocacy doctrines.  For Pooler,

Turner’s communications were advocacy of the use of force and not a threat. It is clear that Turner wished for the deaths of Judges Easterbrook, Posner, and Bauer. But I read his statements, made in the passive voice, as an exhortation toward “free men willing to walk up to them and kill them” and not as a warning of planned violence directed toward the intended victims. This reading is furthered by the fact that Turner’s words were posted on a blog on a publicly accessible website, and had the trappings of political discourse, invoking Thomas Jefferson’s famous quotation that “[t]he tree of liberty must be replenished from time to time with the blood of tyrants and patriots,” Although vituperative, there is no doubt that this was public political discourse.

[citations omitted].  But Pooler continued that this did not mean that Turner's speech was constitutionally protected.  Instead, the question should be whether Turner's speech was an incitement protected - - - or not - - - under Brandenburg v. Ohio (1969).  She quotes the district judge on this point but concludes by noting that Turner was not charged under the incitement statute, but only the threat statute.

Judge Pooler seems to have the better view here, as the blog post was not directed to the persons threatened but exhorted others to act.  But the majority would view such a construction as overly technical.

Listed below are links to weblogs that reference Second Circuit on True Threats, The First Amendment, and the Passive Voice :