In her opinion in Hodge v. Talkin, United States District Judge for the District of Columbia Beryl Howell held unconstitutional the federal statute prohibiting assemblies and displays at the Supreme Court building or grounds.  The statute at issue, 40 USC §6135 provides: 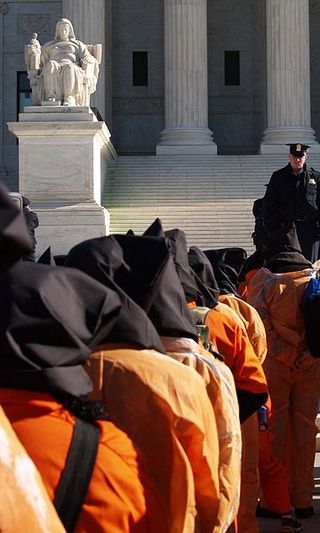 Guantanamo Bay Protest Outside the Supreme Court 2007
As we have previously discussed, the Supreme Court building has been afforded special First Amendment status and even a non-protesting person with "Occupy Everything" on his jacket has been subject to arrest.

Hodge, a college student, was initially arrested under §6135 for wearing a 3 x 2 foot sign that read "The U.S. Gov. Allows Police To Illegally Murder and Brutalize African Americans And Hispanic People."  After an agreement was reached in the criminal case, Hodge filed a complaint challenging the constitutionality of the statute. The judge held that Hodge had standing, despite some suggestions at oral argument to the contrary.

Judge Howell's extensive opinion recites the history of the statute, including the fact that the nearly identical precursor statute (40 USC §13k) was upheld by the United States Supreme Court in United States v. Grace (1983), over the partial concurrence and dissent of Justice Thurgood Marshall, which she calls "prescient" in the latter part of her opinion.  However, Judge Howell distinguishes Grace by stating that the decision "focused only on the constitutionality of the Display Clause" "as applied to the sidewalks surrounding the Supreme Court’s grounds, but left unresolved the facial constitutionality of the Display Clause and Assemblages Clause."  Judge Howell then discusses the cases of the DC Court of Appeals that have "for decades affirmed convictions" but without "delving deeper into the constitutional analysis" than its initial cases.

After describing the Supreme Court plaza, the judge assumed without deciding that the Government's argument that the plaza was a "nonpublic forum" was correct.  Nevertheless, the judge held that the statute was not a reasonable limitation on speech.  Judge Howell rejected both of the Government's proffered interests: “permitting the unimpeded ingress and egress of visitors to the Court” and “preserving the appearance of the Court as a body not swayed by external influence.” In discussing the unreasonableness of the "influence" interest, Judge Howell opined:

It is hard to imagine how tourists assembling on the plaza wearing t-shirts bearing their school’s seal, for example, could possibly create the appearance of a judicial system vulnerable to outside pressure.

She concluded that while "there may be a legitimate interest in protecting the decorum of the judiciary, the challenged statute is not a reasonable way to further that interest."  This also led to her finding that the statute was overbroad.  She considered the assemblage clause and the display clause of the statute separately, but again, her examples - - - preschool children, Court employees, and tourists in t-shirts - - - were key to the analysis.

Finally, Judge Howell rejected imposing a judicial construction, such as an intent requirement, to save the constitutionality of the statute.