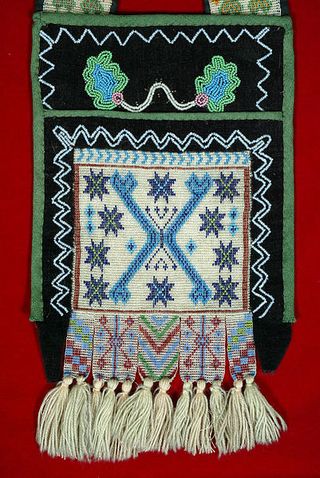 Badolier Bag of the Ojibwa Peoples
In an opinion by Justice Alito, a majority of the Court construed the Indian Child Welfare Act, ICWA, as not violated by the adoption of "Baby Veronica" by a white couple although her father is Native American.  The majority stated that it assumed that the biological father qualified as a "parent" under ICWA, but that the involuntary termination of his rights, if any, met ICWA.  The majority opinion is relatively brief (19 pages), but there are multiple opinions: a concurring opinion by Thomas, a concurring opinion by Breyer, a dissenting opinion by Scalia, and a lengthy dissenting opinion by Sotomayor, joined by Ginsburg and Kagan, and partially by Scalia.

These divisions were evident from the oral argument and our preview sets out the arguments and issues.

From the perspective of constitutional law, the case is noteworthy for its application of the doctrine of constitutional avoidance and equal protection.  At the end of the majority opinion, Justice Alito refers to the problem, noting that ICWA "was enacted to help preserve the cultural identity and heritage of Indian tribes, but" under the interpretation of the South Carolina Supreme Court that is being reversed, ICWA "would put certain vulnerable children at a great disadvantage solely because an ancestor—even a remote one— was an Indian."  Thus,

a biological Indian father could abandon his child in utero and refuse any support for the birth mother—perhaps contributing to the mother’s decision to put the child up for adoption—and then could play his ICWA trump card at the eleventh hour to override the mother’s decision and the child’s best interests. If this were possible, many prospective adoptive parents would surely pause before adopting any child who might possibly qualify as an Indian under the ICWA. Such an interpretation would raise equal protection concerns . . . .

The majority was thus seemingly convinced by the argument on behalf of the adoptive parents that such an interpretation of ICWA would be "basically relegating the child, the child to a piece of property with a sign that says, "Indian, keep off. Do not disturb." "

Sotomayor's opinion for the four dissenting Justices makes clear that the "majority does not rely on the theory pressed by petitioners and the guardian ad litem that the canon of constitutional avoidance compels the conclusion that ICWA is inapplicable here," but observes that the "majority nevertheless offers the suggestion that a contrary result would create an equal protection problem."  Sotomayor's opinion also seeks to call the majority to account for the tenor of the opinion:

The majority’s repeated, analytically unnecessary references to the fact that Baby Girl is 3/256 Cherokee by ancestry do nothing to elucidate its intima­ tion that the statute may violate the Equal Protection Clause as applied here. See ante, at 1, 6; see also ante, at 16 (stating that ICWA “would put certain vulnerablechildren at a great disadvantage solely because an ancestor—even a remote one—was an Indian” (emphasis added)). I see no ground for this Court to second-guess the membership requirements of federally recognized Indian tribes, which are independent political entities.

The majority’s treatment of this issue, in the end, does no more than create a lingering mood of disapprobation of the criteria for membership adopted by the Cherokee Nation that, in turn, make Baby Girl an “Indian child” under the statute. Its hints at lurking constitutional problems are, by its own account, irrelevant to its statutory analysis, and accordingly need not detain us any longer.

It is Justice Thomas' concurring opinion, however, that most expansively engages with the doctrine of "constitutional avoidance," but his concern is not equal protection.  Instead, Thomas' 12 page opinion is devoted to the question of Congressional power:  "The threshold question, then, is whether the Constitution grants Congress power to override state custody law whenever an Indian is involved."  For Thomas, ICWA's grounding in the Indian Commerce Clause, Art. I, §8, cl. 3, and “other constitutional authority” that give Congress with “plenary power over Indian affairs,” is constitutionally suspect.

Thomas balances the lack of Congressional authority with federalism concerns, and part of his rationale rests upon family law as being within the province of the states.   It will be interesting to see how this concern is articulated in tomorrow's anticipated decision in United States v. Windsor involving the constitutionality of the federal "Defense of Marriage Act."

RR
[image: Badolier bag of the Ojibwa via]