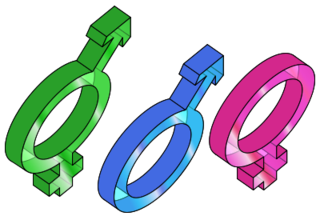 The surgical "assignment" of sex/gender to an infant born with "ambiguous" genitals is a problem that has garnered much attention.

The Constitutional Court of Colombia issued a series of opinions beginning in 1995, analyzed in a 2004 law review article by Kate Haas, Who Will Make Room for the Intersexed?, that recognize a constitutional right of children, albeit limited, with regard to the surgery.  A ground-breaking symposium issue of Cardozo Journal of Law & Gender in 2005 engages with many of the legal issues and proposed solutions, often recognizing the limits of constitutional remedies in the United States given that the surgeries are usually the result of private action.

But a complaint filed this week, M.C. v. Aaronson, by the Southern Poverty Center claims a violation of both substantive and procedural due process under the Fourteenth Amendment by South Carolina doctors who performed genital surgery on a child in state custody (foster care).  M.C., now 8 years old, brings the case through his adoptive parents.

The substantive due process claim is a relatively obvious one, building on established United States Supreme Court cases finding a right to be free of coerced medical procedures including Cruzan v. Director, Missouri Department of Health (1990).  The right is a bit muddled, however, given that the highly discredited 1927 case of Buck v. Bell has never been actually overruled; the declaration that castration was as unconstitutional penalty for a crime in Skinner v. Oklahoma rested on equal protection grounds.

The procedural due process claim is more novel, contending that the minor was entitled to a pre-deprivation hearing before the surgery.  Such a hearing would presumably be of the type that Erin Lloyd recommended for all minors (whether in state custody or not) in her article From the Hospital to the Courtroom: A Statutory Proposal for Recognizing and Protecting the Legal Rights of Intersex Children in the Cardozo Journal of Gender and Law Symposium issue.

An accompanying lawsuit filed in state court alleges medical malpractice and failure to obtain informed consent, raising the same underlying facts and many of the same issues, but under state law.

Southern Poverty Center has produced a video featuring the parents and outlining the facts of the case:

This is definitely a case to watch.

Listed below are links to weblogs that reference Federal Complaint for Unconstitutional Sex Assignment Surgery on Infant:

Being Transsexual with Intersex type indicators that show ones chromosomes are both male and female with secondary male and or female characteristics. I grew up in the 50's and 60's knowing I was different and would pray many nights as a child to let me wake up the girl I knew I was. I saw an article in 1956 about Christine Jorgensen that gave me hope that one day I to could have this surgery. When I was in my 20's I read an article in a Baltimore,MD. newspaper about a Dr. John Money and a program for those seeking reassignment surgery at Johns Hopkins Hospital. I was denied any help back then because they didn't really understand or know a lot about Intersex and or Transsexuals. I remember reading later that Dr. John Money had done surgery on a Intersex person and got it totally wrong and ruined that persons life. I chatted with this person on line a few years ago and we both talked of the thoughts of suicide and I was very close in doing it if a person didn't stop me from doing it. I am still waiting for help at 65 because unless you have a lot of money for surgeries forget it. It is time our Doctors and Government help us in the right to live a normal type life without hate groups hounding us as freaks.