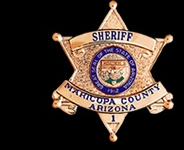 Recall that Sheriff Arpaio is a controversial figure who has styled himself as America's "toughest sheriff" and whose policies such as shackling pregnant inmates giving birth and forcing male inmates to "wear pink" have been subject to constitutional challenge.

In the Melendres class action lawsuit, the district judge listed the issues as:

The judge's extensive discussion of the trial and his findings of fact provide a detailed portrait of the MCSO's attempts to enforce immigration laws, including  its "LEAR" policy (Law Enforcement Agency Response in conjunction with federal immigration authorities), "saturation patrols,"  and mixed messages about the permissibility of the consideration of race or "Mexican ancestry." The opinion details the often rocky relationship between MCSO and federal ICE regarding immigration enforcement.

Ultimately, Judge Snow concluded that that the MCSO's stated prohibition of "racial profiling" was limited to an exclusive reliance on race but allowed race to be a factor and did not strive to be race-neutral.  In keeping with this policy, the MCSO routinely relied upon race as a factor according to Judge Snow.  Such policies and practices violate both the Fourth Amendment and the Equal protection Clause of the Fourteenth Amendment.

The Judge entered a permanent injunction prohibiting MCSO from:

Judge Snow encouraged the parties to engage in further negotiations toward a settlement for implementing the injunction and included references to other settlements.  However, Sheriff Arpaio has reportedly already proclaimed his intention to appeal.