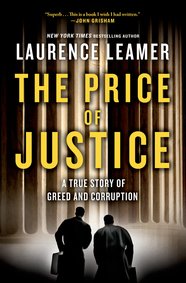 The 2009 sharply divided Supreme Court opinion in Caperton v. Massey Coal is the centerpiece of the new book, The Price of Justice: A True Story of Greed and Corruption by Laurence Leamer.  Recall that the Court in Caperton ruled that due process required judicial recusal of a West Virginia Supreme Court of Appeals judge, Justice Brent Benjamin, in a case involving Massey Coal because of the contributions by Massey Coal to Justice Benjamin's campaign.

The starred review from Publisher's Weekly describes the book as

the riveting and compulsively readable tale of the epic battle between Don Blankenship, the man who essentially ran the West Virginia coal industry through his company Massey Energy, and two seemingly ordinary attorneys: Bruce Stanley and David Fawcett. The centerpiece of the story is a West Virginia mine owner whom Blankenship purposefully bankrupted, and on whose behalf Stanley and Fawcett won (in 2002) a $50 million dollar verdict that is still unpaid. In hopes of having the ruling overturned by the West Virginia Supreme Court, Blankenship sought to “buy” a seat on the court by contributing over $3 million to the successful campaign of a conservative judicial candidate. However, the U.S. Supreme Court eventually found that Blankenship’s contributions were too much to allow the new West Virginia justice to hear the case. Leamer has produced a Shakespearean tale of greed, corporate irresponsibility, and personal hubris on the one hand, and idealism, commitment to justice, and personal sacrifice on the other. Blankenship is a villain for all time, and Stanley and Fawcett are lawyers who bring honor to their profession.

Listed below are links to weblogs that reference Daily Read: New Book "The Price of Justice" Discusses the Caperton Case: