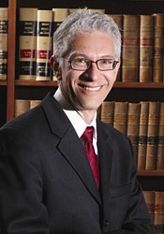 What is Chinese constitutionalism?  Larry Catá Backer's new article, Towards a Robust Theory of the Chinese Constitutional State: Between Formalism and Legitimacy in Jiang Shigong’s Constitutionalism, available on ssrn, not only provides answers to that query, but develops the topic in sophisticated and important ways.  As Backer (pictured right) notes,

The Chinese constitutional system does not imitate those of other developed states, because it political ideology is grounded in Marxist Leninism which suggests a different relationship between the state, the people and the manner of exercising political and economic power, which over the course of nearly a century suggested what Western theorists generally viewed as the anti-constitutionalism of Soviet Stalinism and its variants.

But Backer is not content with such simplistic dismissals.  Instead, exploring the arguments of Chinese LawProf Jiang Shigong (pictured left), Backer traces different strands of Chinese constitutionalism within the context of Chinese culture and society and their possibilities for development.  Backer notes that the "critical distinction for Jiang between Chinese and Western constitutionalism lies in the willingness to fold a Party-State system within notions of substantive constitutionalism—not just in terms of legitimacy but also in terms of providing a foundation for building a governmental apparatus that provides for its people in a way functionally equivalent to that in Western democracies."

For ConLaw comparativists, Backer's article is essential reading: it situates Chinese constitutionalism in global contexts and more importantly, evaluates its various aspects in comparison to each other.  For ConLawProfs who may not consider themselves comparativists, Backer's article may be even more essential.  Backer's exploration is theoretically sophisticated, nuanced, and guaranteed to enrich any reader's thinking about the role of any constitution in any nation, including the United States.

Listed below are links to weblogs that reference Daily Read: Larry Catá Backer on Chinese Constitutionalism: