While for many Conlawprofs Loving v. Virginia is the "face" of love and marriage across racial divides, looking both backward and forward from the 1967 case can add depth to teaching and scholarship about the issue. 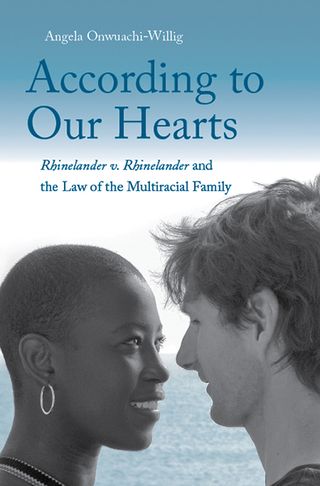 (And if it seems not to be an issue any longer, a quick look at the "controversy" caused by a cereal advertisement featuring an interracial couple and their child is worth considering).

Professor Angela Onwuachi-Willig's new book, According to Our Hearts: Rhinelander v. Rhinelander and the Law of the Multiracial Family, just published by Yale University Press, provides that depth.

Her exploration focuses on Rhinelander v. Rhinelander, a case that did not involve a constitutional issue, except to the extent that racial categorizations always implicate issues of constitutionalism and equality. As Onwuachi-Willig describes in a piece in the UC Davis Law Review,

Alice Beatrice Jones was a working-class woman, who met Leonard Kip Rhinelander, a wealthy white male descendant of the Huguenots and heir to millions of dollars, in the fall of 1921. . . . [They married in a private ceremony and] Just two weeks later, on November 26, 1924, Leonard filed for annulment of his marriage to Alice. He argued that Alice had lied to him about her race. Leonard claimed that Alice had committed fraud that made their marriage void by telling him that she was white and by failing to inform him that she was of “colored blood.”

Rather than litigate her whiteness as many expected, she argued that he knew her racial status.

The trial of the Rhinelanders proved to be shocking on many fronts. It involved racy love letters, tales of pre-marital lust and sex, and the exhibition of Alice’s breasts, legs, and arms in the courtroom to prove that Leonard, who had seen her naked before marriage, would have known that she was colored at the time of their nuptials. What was most scandalous about the Rhinelander case, however,  was the trial’s end. The jury returned a verdict for Alice, determining that Leonard knew her racial background before marriage yet married her anyway.

Onwuachi-Willig's book also provides contemporary arguments that current law fails to protect interracial couples, especially given the privileges that continue to be accorded on the basis of marriage.

As we wait for both Fisher v. UT and the same-sex marriage cases of Perry and Windsor, or as we contemplate their meanings once the opinions are rendered, Onwuachi-Willig's book is an important and pleasurable read.

Listed below are links to weblogs that reference Daily Read: Angela Onwuachi-Willig on Inter-Racial Love and Marriage: