Reversing a lower court, the Colorado Supreme Court upheld the constitutionality of the state's financing of public schools in its opinion in State v. Lobato.

The underlying problem at issue in the contentious case is exemplified by a chart that appears in one of the two dissenting opinions, demonstrating that "education funding in Colorado has been in steady decline" in recent decades: 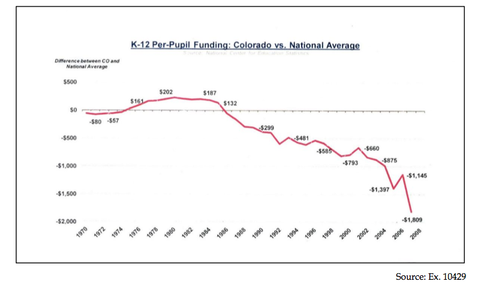 The majority of the state supreme court concluded:

The public school financing system enacted by the General Assembly complies with the Colorado Constitution. It is rationally related to the constitutional mandate that the General Assembly provide a “thorough and uniform” system of public education. Colo. Const. art. IX, § 2 (the “Education Clause”). It also affords local school districts control over locally-raised funds and therefore over “instruction in the public schools.” Colo. Const. art. IX, § 15 (the “Local Control Clause”).

The meaning of "thorough and uniform" in the state constitution was discussed by the majority through reference to dictionary definitions and limited precedent.  The court concluded it did not require equality, but only a rational relationship test.   Under this test, the plaintiffs did not "establish beyond a reasonable doubt that the system fails to pass constitutional muster."

The majority's 26 page opinion was countered by more than 40 pages in the two dissenting opinions by Justices Bender and Hobbs (each joining in the other Justice's opinion).  These opinions argue that the majority "abdicates this court’s responsibility to give meaningful effect" to the state constitution's education clause and failed to guarentee that students receive their constitutional right to education.

Like so many other constitutional challenges to state educational systems, this one revolves around vague state constitutional provisions and legislative choices that many view as underfunding education on a state-wide basis.  Surely, this decision in Colorado will be contentious.