What do our visual images of justice tell us?  Judith Resnik with her co-author Dennis E. Curtis, provide ample, exciting and complex answers to that question in their marvelous book, Representing Justice: Invention, Controversy, and Rights in City-States and Democratic Courtrooms, published in 2011.

Resnik's 2013 essay, Equality’s Frontiers: Courts Opening and Closing, adapted from remarks at an event celebrating Justice Ginsburg’s gender-equality jurisprudence and drawing on the book, is a brief but evocative look at how justice and equality are - - - and were - - - portrayed.  Two images Resnik includes and analyzes from WPA murals in courthouses are particularly salient.

First, there is an image of Justice as Protector and Avenger in a South Carolina courtroom. 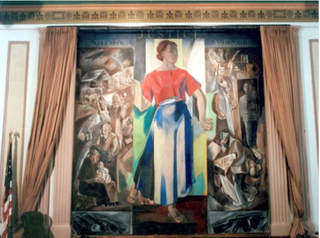 Not particularly remarkable, one might think, until one reads about the objections to "justice" looking like a “barefooted mulatto woman wearing bright-hued clothing.”

Second, there is an image in a Idaho courthouse: 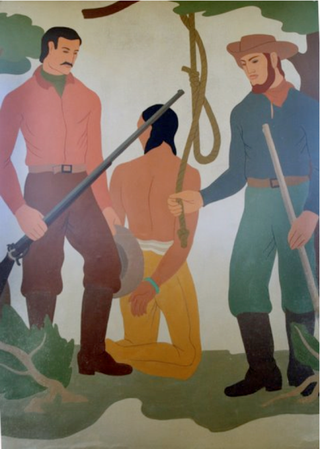 Should this be removed as offensive?  Or displayed as an accurate part of the history of justice and equality?  Resnik shares the decisions of state officials, ultimately made in consultation with Native tribes.

Resnik contends that such images, including these from courthouses in South Carolina and Idaho,

A terrific read - - - and look - - - as well as a reminder of the richness of the Representing Justice book.

Listed below are links to weblogs that reference Daily Read: Resnik on Equality's Frontiers: