In its sharply divided opinion in Center for Constitutional Rights v. United States, the United States Court of Appeals for the Armed Forces rejected a claim that of public access to the trial and documents regarding the Bradley Manning court martial.

In this case, the appellants - - Center for Constitutional Rights, Glenn Greenwald, “Salon.com,” Jeremy Scahill, “The Nation,” Amy Goodman, “Democracy Now!,” Chase Madar, Kevin Gosztola, Julian Assange, and Wikileaks - - - sought press access.  The three-judge majority noted that the court "invited counsel for the accused to file a brief on the issues but they declined to do so."  It concluded that the court did not have the "jurisdiction" to grant the relief requested. 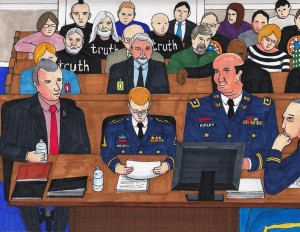 Bradley Manning reading his plea statement in court, sketched by Clark Stoeckley via

The two dissenting opinions - - - each judge authoring an opinion that the other joined - - - reject the majority's disinclination to assert its own power.

Judge Baker's opinion stops short of concluding that there should be press access to the proceedings and documents, but does conclude that the court should determine the specific contours of the First Amendment right.

Judge Cox's dissenting opinion, joined by Baker, emphasized the court's role to assist the military trial judge, noting that the military judges " are in a better position to do that than is a federal district judge to solve the issues presented."

Thus, it seems as if it will continue to be difficult to determine what is happening in the court martial of Bradley Manning.

Listed below are links to weblogs that reference Bradley Manning's "Secret" Trial: