Update on the Jacket in the United States Supreme Court Building

No, not John Paul Cohen's jacket about the draft, central to the 1971 case of Cohen v. California.

This jacket was worn a little over a year ago and prompted an arrest as we discussed then. 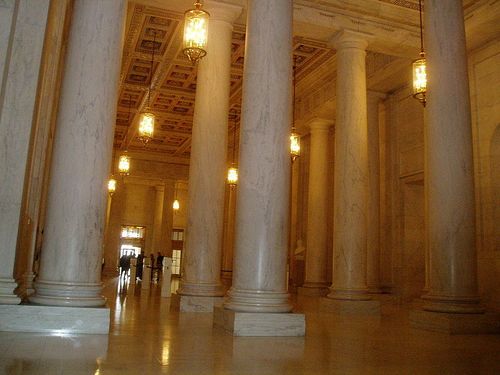 Inside of US Supreme Court Building

Recall that the Supreme Court Building has special status, arguably as a First Amendment free-zone.  And although the charges were dropped against last year's  jacket wearer - - - Fitzgerald Scott - - - he brought suit in the United States District Court for the District of Columbia.

In its memorandum supporting its motion to dismiss,the United States Attorney's office includes this intriguing point heading: "The Fact that Plaintiff’s Jacket Conveyed a Message Only Reinforces the Conclusion that There Was Probable Cause for the Arrest."   Essentially, the government argues that the "message" does not support a First Amendment claim of political speech targeted because of its content, but instead is a "concession" under 40 U.S.C. § 6135, prohibiting the display of items designed to bring notice to an organization or movement within the United States Supreme Court building.  Recall that the Supreme Court has upheld the constitutionality of §6135.

While it seems that Scott has an uphill battle under the current precedent, his battle is certainly a reminder of Justice Thurgood's Marshall observation that the Supreme Court occupies an ironic position with regard to the First Amendment.

Listed below are links to weblogs that reference Update on the Jacket in the United States Supreme Court Building :