In the second of the same-sex marriage cases, after yesterday's Proposition 8 argument, the Court heard oral argument today in  United States v. Windsor, a grant of certiorari to the Second Circuit opinion holding DOMA unconstitutional and applying intermediate scrutiny to sexual orientation classifications. 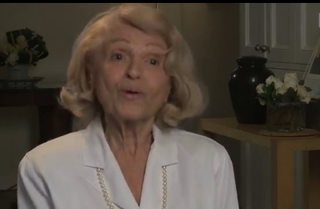 The audio is here:


Edith Windsor (pictured) argues that DOMA - - - the Defense of Marriage Act - - -violates the equal protection component of the Fifth Amendment.  Recall DOMA is not being defended by the Obama Administration, but by BLAG - the Bipartisan Legal Advisory Group - - - at taxpayer expense which reportedly topped $3 million even before today's arguments.

On the standing issue:

Similar to the Proposition 8 case argued yesterday, the fact that the government is not defending the constitutionality of the law raises a quetions about the Court's power under Article III to decide the issues.

Justice Kagan asked one of the most trenchant questions regarding standing and injury, especially given the Obama Administration's stated belief that DOMA is unconstitutional:

But Jackson answered that the federal government had not asked the Court to remedy that injury and that the Article III "case or controversy" requirement is "nested in an adversarial system."

Throughout the arguments on standing there was a search for the most controlling precedent - - - with Justice Roberts' asking "is there any case where all the parties agreed with the decision below and we upheld appellate jurisdiction?  Any case?"  The general consensus seemed to be that Windsor was distinct from the most similar case, INS v.Chadha decided in 1983. (Chadha involved the legislative veto and produced a very fractured set of opinions on the merits).  Justice Scalia had some barbs to throw at the present administration, contrasting it to when he was at the Office of Legal Counsel.

The challenge to DOMA is under the equal protection component of the Fifth Amendment, with the Solicitor General  arguing that the standard to be applied is intermediate scrutiny and Kaplan arguing that DOMA failed even rational basis scrutiny.  Yet the equal protection arguments were embroiled with the federalism and Congressional power to pass DOMA; Justice Kennedy stated that the federalism and equal protection issues were "intertwined."  [A good example this intertwinement occurred in the First Circuit opinion that held DOMA unconstitutional.]

For Solicitor General Verrilli, the intertwinement aspect was a cause of consternation and undercut his argument yesterday in the Proposition 8 case that even a state law denying same-sex marriage violated equal protection and that the correct standard was intermediate scrutiny as the Second Circuit held.

The consistency principle of equal protection doctrine - - - that the same standard should apply no matter what classification was benefitted or burdened - - - was also a focus, with hypotheticals about the standard should Congress decide that it would provide federal benefits to same-sex couples even if the state did not recognize their marriages. [The question of who would have standing to challenge such a law did not arise].

Justice Roberts repeatedly brought up the question of animus as part of a rationality with bite inquiry, asking at least twice whether the 84 Senators who voted for DOMA and the President [Clinton] were motivated by animus.  Justice Roberts also raised the question of political powerlessness, often an inquiry in determining the level of equal protection scrutiny. Roberts echoed an opinion expressed by Justice Scalia in earlier cases that sexual minorities were anything but politically powerless when he told Roberta Kaplan, representing Edith Windsor, "As far as I can tell, political figures are falling over themselves to endorse your side of the case."

Justice Ginsburg probably uttered the most memorable quote of the day's arguments.  In her questioning of Paul Clement, who represented BLAG, she condensed his argument as saying that in granting same-sex marriages, states were nevertheless saying there were really "two kinds of marriage; the full marriage, and then this sort of skim milk marriage."   Her remark would be even more noteworthy for people who recall that the scrutiny standard is often traced to the famous footnote 4 in Carolene Products, a case about - - - milk.

Article 2 of DOMA permits states to not recognize same-sex marriages from other states. This non-recognition would allow a woman to marry in NY, have children...and then walk away from the marriage..move to FL and marry a man. A person can walk away from all marriage obligations to spouse and child...and not be considered a polygamist. Given human nature this situation is inevitable. I fail to see how DOMA supports the concept of marriage.