Justice Antonin Scalia's remark during the oral arguments in Shelby County v. Holder last week characterizing the preclearance provision of the Voting Rights Act as a "racial entitlement" has garnered much attention, including "gasps" in the Supreme Court chambers itself. 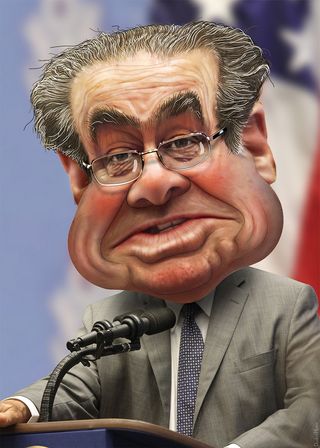 Of course, the ability of Scalia's comments to provoke is not new: his statements in last year's oral arguments in Arizona v. United States regarding the constitutionality of SB1070 drew particular attention.

In the Shelby argument, Scalia described the Voting Rights Act provision and its reenactments as

a phenomenon that is called perpetuation of racial entitlement.  It's been written about.  Whenever a society adopts racial entitlements, it is very difficult to get out of them through the normal political processes.

To what writings does Justice Scalia refer?  ConLawProf Chad Flanders, in a news commentary that is itself garnering attention, suggests that Justice Scalia might be referencing Professor Scalia's own writings.  Flanders points to Scalia's article, The Disease as Cure: “In Order to Get Beyond Racism, We Must First Take Account of Race,” 1979 Wash. U. L. Rev. 147, available here.

Scalia's writing is not an article but rather published as a "Commentary" and obviously taken from his remarks on a panel at a Symposium entitled "The Quest for Equality."  Scalia describes himself as the "anti-hero" of the panel: the other commentator was Herma Hill Kay and the main paper was by Harry T. Edwards. (Ruth Bader Ginsburg delivered the main paper on the next panel.)  His subtitle is derived from Justice Blackmun's dissenting and concurring opinion in Regents of University of California v. Bakke, 438 U.S. 265, 407 (1978).

Scalia indeed does use the term "racial entitlement" in his remarks:

The affirmative action system now in place will produce the latter result because it is based upon concepts of racial indebtedness and racial entitlement rather than individual worth and individual need; that is to say, because it is racist.

But of course, his rejection of "racial indebtedness" was clear in his 1995 concurring opinion in Adarand Constructors, Inc. v. Pena, 515 U.S. 200, in which the Court held an affirmative action policy unconstitutional.  Scalia wrote then:

under our Constitution there can be no such thing as either a creditor or a debtor race. That concept is alien to the Constitution's focus upon the individual.
And of course, Scalia is not alone in his views.  Not only was he concurring in Adarand, but the notion of affirmative action as racist is forcefully articulated by Chief Justice John Roberts in the last (substantive) line in the opinion for the Court in  Parents Involved in Cmty. Sch. v. Seattle Sch. Dist. No. 1, 551 U.S. 701, 748 (2007):
The way to stop discrimination on the basis of race is to stop discriminating on the basis of race.
Perhaps the issue is not so much the provenance of Scalia's statements during oral arguments, but the surprise they are still capable of provoking.

RR
[image: caricature of Antonin Scalia by DonkeyHotey via]

Listed below are links to weblogs that reference "Racial Entitlement": Professor Scalia, then and now :

Like myself, a white male of advanced age, Justice Scalia and Chief Justice Roberts have suffered so greatly from race discrimination that we all are determined to eliminated it forever. Their methodology, steeped in the constitutional genius both so frequently display, is to pretend that race no longer exits, ala Colbert. We graduates of the Andovers and Harvards recognize that merit is all; we all enter life in exactly the same fashion and condition, and we are not responsible for he fact that our parents, and not yours, were able to provide us with the finest things in life. Suck it up, as the Marine instructor I never had might have said to me.

But let this comment not be all about vitriol. How has "entitlement" become such a pejorative? Doesn't the existence of a right, such as a right to the equal protection of the laws, "entitle" one to something? Wouldn't Justice Scalia claim he is "entitled" to his Christian religious beliefs, and hasn't he written that a majority of Christians should be entitled to publicly "give God thanks and supplication as a people," (dissenting in McCreary County v. ACLU) despite the First Amendment's ban on establishment of religion? Why shouldn't people still suffering the effects of centuries of government enforced race discrimination be entitled to justice and fair treatment? Because, from here atop Olympus, everyone below looks equal. Equally small.

The problem with the conservative arguments seems to be that, while they seem to argue for rejecting all forms of discrimination on Constitutional grounds, they do not recognize any right or responsibility on the part of the Federal government for defending those grounds in actual practice. In other words, they are arguing that any attempt by the Government to prevent discrimination is itself discriminatory, in essence discrimination against discriminators, a basic logical fallacy. Far be it, I presume, for ACLU lawyers to appreciate this, since presenting and perpetuating logical fallacies is the basic tool of legal practice in general.