Daily Read: US v. Windsor, the DOMA Case, Amicus Brief of Scholars of the Constitutional Rights of Children in Support of Windsor

Second in a Series: Guest Post by Anetta Sookhdeo, City University of New York (CUNY) School of Law, class of 2014

The brief of the Scholars of the Constitutional Rights of Children (including Professor Tanya Washington, pictured) in support of Respondent, Edith Windsor, responds to several of BLAG’s assertions that the Defense of Marriage Act (DOMA) advances the welfare of children by (1) providing a stable structure to raise unintended and unplanned offspring; (2) encouraging the rearing of children by their biological parents and (3) promoting childrearing by both a mother and a father.  These goals are discredited by the Amici because they merely reflect a preference for children to be raised by opposite-sex parents. 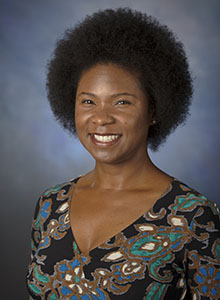 The Amici assert that DOMA creates a classification based on children living in households headed by same-sex parents and those living in households headed by opposite-sex parents.  Subsequently, children are harmed by treating these two classes differently, even though they are identically situated.  To bolster this point, the Amici cite an October 2011 study that estimates about two million children make up the class of children being raised by LGBT parents.  Of those, according to the United States Census, between three hundred thousand and one million children are being raised by same-sex couples.  Moreover, these numbers are likely to increase as more states begin to legally recognize same-sex marriages.

Additionally, DOMA deprives children of important federal resources and protections by making households headed by same-sex parents ineligible to receive them.  The Amici assert that these benefits and resources, which include the Family Medical Leave Act (FMLA), Federal Employees Health Benefits Program, Social Security payments to spouses and filing joint tax returns, are important safety features to protect children within family units.  For example, the goal of the FMLA to promote stability and economic security of families is not extended to households where children are raised by same-sex parents.  Whereas eligible opposite-sex married couples are eligible to take up to twelve weeks of unpaid leave to care for a sick child, spouse or parent, same-sex married couples are ineligible for this benefit.  The Amici argue that children within these families being deprived of federal resources have the same need and interest in family security and stability and suffer an injury that is cumulative over the course of their lifetimes.

Furthermore, children suffer psychological harm as a result of DOMA symbolically expressing inferiority of families headed by same-sex parents.  According to the Amici, the purpose and effect of DOMA is to stigmatize families with same-sex parents and, by extension, the children of those families.  DOMA accomplishes this result by communicating to those children in households headed by same-sex couples that their family unit is “morally objectionable and functionally deficient.”  The Amici argue that the Court has already spoken through Brown v. Board of Education and Plyler v. Doe those statutes which place a stigma on children and confer adverse psychological effects are unconstitutional.

The Amici’s second argument is that DOMA should be invalidated because it does not survive any level of scrutiny for punishing children based on moral disapproval for the conduct of their parents.  The Court’s goal and history of protecting the right of children to “self-determination and to flourish fully in a society without being hampered by legal, economic and social barriers” is seen by the decisions in Levy v. Louisiana and Weber v. Atena Casualty & Surety Co.  In these cases, the court decided that invidious classifications based on illegitimacy were impermissible.  The Amici acknowledge that while the state may have a valid interest in promoting marriage and childbirth within marriages, the state is not permitted to exclude a group of children who have identical interests in the benefits at issue, simply because the group of children is disfavored.

In addition, the Amici argue that the outcome of Plyler indicates the Court’s view that a foundational mission of the Equal Protection Clause is “to work [for] nothing less than the abolition of all caste-based and invidious class-based legislation.”  Plyler indicated that while states could disapprove of the presence of undocumented immigrants in the United States, they could not justify the imposition of disabilities on the minor children of undocumented immigrants.  The Amici argue that, under the mission of the Court and past rulings, laws that discriminately determine legal, economic and social status of children are prohibited.

Lastly, the Amici argue that states may not enforce moral disapproval against children based on the relationship between their parents.  The decision in Palmore v. Sidoti held that “Private biases may be outside the reach of the law, but the law cannot, directly or indirectly, give them effect.”  Palmore v. Sidoti, 466 U.S. 429 (1984).  Nor may the Court rely on such private biases which draw “impermissible, overbroad generalizations about different talents, capacities or preferences of males or females”.  Caban v. Mohammed, 441 U.S. 380 (1979).  The Amici urge the Court to find that DOMA gives effect to private bias against same-sex couples, particularly in regards to private biases about gender-role stereotypes in parenting, and should be found unconstitutional.

This brief bolsters the Government’s position by highlighting an argument that largely went unnoticed but is also at the heart of the issue being decided.  The brief adds cases that were not before mentioned in the Government’s brief and provides additional avenues to argue that DOMA should be held unconstitutional.  For example, the Government’s brief does not discuss Brown v. Board of Education, but here Brown is used as a primary case to advocate for invalidating a statute that adds a stigma against children of households headed by same-sex couples.

[posted and edited by RR]

Listed below are links to weblogs that reference Daily Read: US v. Windsor, the DOMA Case, Amicus Brief of Scholars of the Constitutional Rights of Children in Support of Windsor: