Developments in the Bradley Manning case include the news that Manning has pleaded guilty to some charges - - - but not to the charge of aiding the enemy - - - as reported by the NY Times.

While there is apparently no official copy of Bradley Manning's statement, The Guardian has published a copy of Manning's lengthy statement as transcribed by independent journalist Alexa O'Brien. 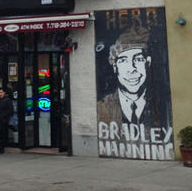 Of particular interest are Manning's statements undermining his intent to aid the enemy and supporting his claim of whistle-blowing, including his choice of recipients for his information.

At this point I decided that it made sense to try to expose the SigAct tables to an American newspaper. I first called my local news paper, The Washington Post, and spoke with a woman saying that she was a reporter. I asked her if the Washington Post would be interested in receiving information that would have enormous value to the American public.

Although we spoke for about five minutes concerning the general nature of what I possessed, I do not believe she took me seriously. She informed me that the Washington Post would possibly be interested, but that such decisions were made only after seeing the information I was referring to and after consideration by senior editors.

I then decided to contact [missed word] the most popular newspaper, The New York Times. I called the public editor number on The New York Times website. The phone rang and was answered by a machine. I went through the menu to the section for news tips. I was routed to an answering machine. I left a message stating I had access to information about Iraq and Afghanistan that I believed was very important. However, despite leaving my Skype phone number and personal email address, I never received a reply from The New York Times.

Such revelations invite an obvious comparison between Bradley Manning's plight and that of Daniel Ellsburg, who revealed The Pentagon Papers and prompted the renowned First Amendment decision in New York Times v. United States (1971).   Another comparison is to a Civil War prosecution, even as courts consider First Amendment claims resisting the government subpoenas of Twitter accounts.

Listed below are links to weblogs that reference Bradley Manning's Statement: