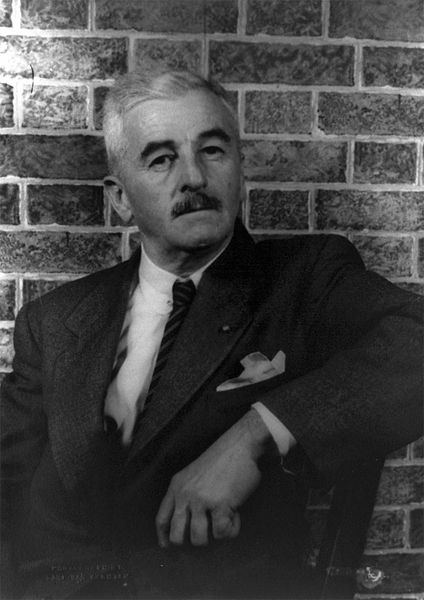 As the Court - - - and the country - - - consider the Voting Rights Act (VRA) and the constitutionality of the preclearance provision at issue in Shelby County v. Holder ConLawProfs might find useful the insights of  Andrew Cohen, Atiba Ellis, Adam Sewer (on CJ Roberts), Adam Winkler or numerous others.  But the observations of William Faulkner (pictured), Nobel Prize in Literature recipient who placed Yoknapatawpha County, Mississippi on our (fictional) maps are also pertinent according to Joel Heller's excellent article, Faulkner’s Voting Rights Act: The Sound and Fury of Section Five, 40 Hofstra Law Review 929 (2012), and available on ssrn.

Joel Heller argues that pronouncements that 'The South has changed' fail to take into account the "ongoing burden of memory that Faulkner portrays so powerfully."  Heller contends that the VRA's section 5 preclearance provision "does not punish the sons for the sins of the father, but keeps in check the uncertain consequences of a current ongoing consciousness of those sins."  Heller uses Faulkner to effectively discuss various attitudes short of intentional discrimination that might nevertheless have racially discriminatory results.  These include lawmakers shame and denial of the past accompanied by a devotion to the "things have changed" mantra that would prevent perceptions of racially problematic actions.  Additionally, "local control" possesses a nostalgic power, even as the era being evoked was one of white supremacy.

While Faulkner did not live to see the VRA Act become law, Joel Heller's engaging article is definitely worth a read as the Court considers Congressional power to remedy discrimination in the Old/New South.

RR
[image of William Faulkner via]

Listed below are links to weblogs that reference Daily Read: William Faulkner and the Voting Rights Act: