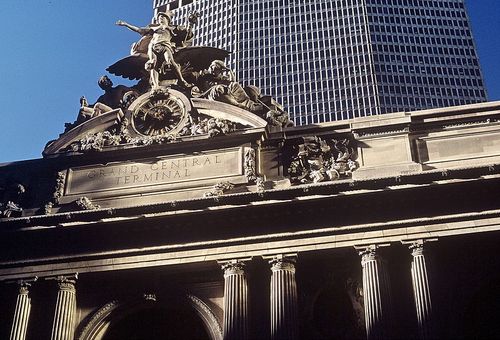 As Grand Central Station celebrates its centennial today, there are many celebrations and discussions, including this excellent one from "Transportation Nation" being aired on some NPR stations, including NYC:


The case to which the report refers is Penn Central Transportation Co. v. New York City (1978), a staple of modern takings clause doctrine and theory.   The owner of Grand Central - - - confusingly it was Penn Central - - - wanted relief from the NYC landmarks law which prevented the building of a large office building over Grand Central because it would destroy the historic and aesthetic features of the Grand Central.  The United States Supreme Court rejected the takings argument.  Writing for the Court, Justice Brennan noted that "the submission that appellants may establish a "taking" simply by showing that they have been denied the ability to exploit a property interest that they heretofore had believed was available for development is quite simply untenable."   The opinion continued:

"Taking" jurisprudence does not divide a single parcel into discrete segments and attempt to determine whether rights in a particular segment have been entirely abrogated. In deciding whether a particular governmental action ha effected a taking, this Court focuses rather both on the character of the action and on the nature and extent of the interference with rights in the parcel as a whole.

Of course, the Court would vacillate from between this whole vs. fractional approach in subsequent cases, but the most recent takings cases seem to confirm Brennan's view.

For a trenchant discussion of the current state of "air rights" and takings doctrine, take a look at LawProf Troy Rule's Airspace and the Takings Clause, forthcoming in Washington University Law Review, and available in draft on ssrn.

Listed below are links to weblogs that reference Daily Read: Grand Central Station and The Takings Clause: