Daily Read: Andrew Cohen in The Atlantic on Shelby and the Voting Rights Act

Entitled "After 50 Years, the Voting Rights Act's Biggest Threat: The Supreme Court," Andrew Cohen's extensive article just published in The Atlantic is a must-read for anyone following the Court's pending oral argument (on Wednesday, February 27) in Shelby County v. Holder.

Recall that the Court's grant of certiorari last November 9 put the Voting Rights Act (VRA) "in the crosshairs" of the Court - - - as we said at the time - - - noting that the VRA's constitutionality had been seriously questioned but ultimately evaded by the Court's 2009 decision in Northwest Utilities District of Austin v. Holder .  The DC Circuit had upheld the constitutionality of the preclearance provisions of the VRA. 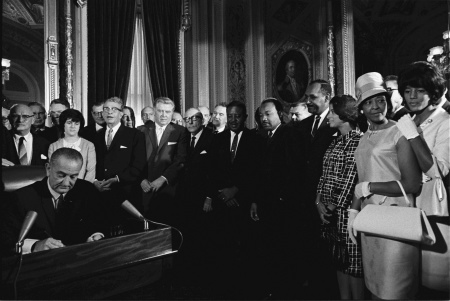 "President Lyndon B. Johnson signs the Voting Rights Act of 1965 while Martin Luther King and others look on"

Andrew Cohen's article provides a terrific contextualize of the politics, including the Court's politics, that surround the constitutional controversy.  Cohen writes that "racial polarization has intensified during the Obama Administration," with "'explicit anti-black attitudes'" around the country, "especially among Republicans," many of whom "sponsored and enacted some of the voter suppression laws of the 2012 cycle."  Cohen also argues that the Court essentially "invited many of the state voter suppression efforts of the past three years" by its decisions, including not only Northwest Utilities District of Austin v. Holder, but also the 2008 decision in Crawford v. Marion County, upholding a voter identification statute.  Cohen contends: "Having created the factual and legal conditions to undermine the federal law, the Court now is poised to say that it is weakened beyond repair."

Cohen concludes that the stakes in Shelby are very high:

If the Court strikes down Section 5 of the Voting Rights Act, this year especially, given the record of the past three years, the justices who do so will reveal a disconcerting level of disconnect from the realities of modern American politics as they were expressed in the near-unanimous renewal of the Act in 2006. And the partisan ruling they would issue in this circumstance would be even more brazenly ideological and untethered from precedent than the Citizens United ruling issued in January 2010.

Cohen's timely, provocative, and well-argued article is definitely worth a read and would be a great suggested reading for law students considering the issue.

Listed below are links to weblogs that reference Daily Read: Andrew Cohen in The Atlantic on Shelby and the Voting Rights Act: