Daily Read: The Story Behind The Ninth Circuit's Self-Abortion Opinion

In September, the Ninth Circuit rendered its opinion in McCormack v. Hiedeman regarding the constitutionality of Idaho's "unlawful abortion" statutes that makes it a felony for any woman to undergo an abortion in a manner not authorized by statute.  McCormack had been charged by the prosecutor Mark Hiedeman based on her procurement of abortion "medications" over the internet.  The court held that imposing a criminal sanction on a woman poses an undue burden under Casey, but the decision was restricted to McCormack given the absence of class certification.

But who is Jennie Linn McCormack?  And how common is procuring abortion "medications" via the internet? 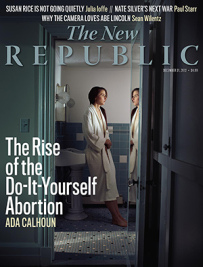 Journalist Ada Calhoun's cover article in this month's The New Republic, "The Rise of DIY Abortions," paints a vivid portrait of Jennie Linn McCormack, as well as her attorney ("an avid fan of The Girl with the Dragon Tattoo books. He saw the character of dogged reporter Mikael Blomkvist as a good role model for a lawyer. . . ").

Determining how many American women have had home abortions is exceedingly difficult: The Centers for Disease Control and Prevention does not track illegal abortions. There is no blood test for drugs like Cytotec, and so such an abortion is indistinguishable from a natural miscarriage, even to a doctor. However, the proliferation of online dispensers suggests a rising demand. There are thousands of websites selling Cytotec for as little as $45 to $75 (compared with $300 to $800 for a legal medicated abortion in a clinic). Some claim to offer the harder-to-come-by Mifeprex, but may in fact be peddling Cytotec, or aspirin, or nothing at all. (Possible sources for the drugs include Mexico, where Cytotec is available over the counter, or even the United States, since it’s also prescribed here as an ulcer medication.)

The question of how drugs like Mifeprex and Cytotec are sold and administered is emerging as the next major front in the abortion debate.

Calhoun's article is a must-read for anyone teaching, writing, or thinking about abortion and is sure to be discussed at the many conferences devoted to Roe v. Wade's 40th anniversary, such as this one at the NYC Bar.

Listed below are links to weblogs that reference Daily Read: The Story Behind The Ninth Circuit's Self-Abortion Opinion: