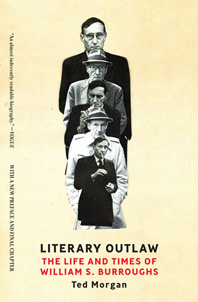 Many also know the broad outlines of William Burrough's life, including his drug addiction and his fatal shooting of his wife.  For those less well-acquainted, Ted Morgan's biography, Literary Outlaw: The Life and Times of William S. Burroughs is an interesting read.  Morgan discusses the various versions of Burroughs' killing of his wife in Mexico by shooting her in the head.  The usual version (and Burroughs' own) features a small social gathering, drinking alcohol, and Burroughs' suggestion that his wife put a glass on her head and he shoot it off "William Tell" style.  He missed and she was dead.  He eventually fled back to the United States and was convicted in Mexico in absentia.  Morgan quotes Burroughs as haunted by the killing and "often" saying his life was an "evil river" and that he was possessed by an "evil spirit."

Given his biography, Burroughs makes a rather odd spokesperson for Second Amendment rights.  Yet, as both Dan Filler over at Faculty Lounge and Brian Leiter quoting Jason Walta note, a December 14 op-ed in USA Today in favor of expansive Second Amendment rights begins with a quote from William S. Burroughs: " "After a shooting spree," author William Burroughs once said, "they always want to take the guns away from the people who didn't do it." "

Listed below are links to weblogs that reference Daily Read: William S. Burroughs and the Second Amendment: