Daily Read: Kende on Revolution and Pragmatism in Constitutionalism 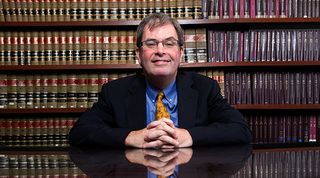 Mark Kende (pictured) argues that we shouldn't be so sure.  In his article, Constitutional Pragmatism, The Supreme Court, and Democratic Revolution, forthcoming in Denver University Law Review and available in draft on ssrn, Kende demonstrates that the usual conceptions of "pragmatism" are incomplete.  He advances several types of pragmatic impulses that are consistent with the US constitutional revolution and subsequent jurisprudence such as "common sense,transitional, political, democratic, economic, empirical, common law,flexible, critical, and comprehensive pragmatism."  He also discusses the types of constitutional pragmatism that are less consistent with revolution: prudential and efficiency-oriented pragmatism.

Kende aims to provide a typology of pragmatism, as a grounding for considering "constitutional pragmatism more intelligently, as well as see its complexity and ubiquity."  For Kende, it is pragmatism - - - rather than originalism or living constitutionalism - - - that has the most descriptive, and perhaps prescriptive power.

Kende's article is an excellent intervention in the ongoing debates of constitutional interpretation.

Listed below are links to weblogs that reference Daily Read: Kende on Revolution and Pragmatism in Constitutionalism: