The First Amendment right to record public police interactions with "smartphones" is the basis of a complaint filed yesterday in Charles v. City of New York.  The facts as alleged by plaintiff Hadiyah Charles are not dissimilar to those in Glik v. Cunniffe in which the First Circuit in 2011 found a First and Fourth Amendment violation and denied qualified immunity to the officers involved. (Compare the Seventh Circuit decision earlier this year). 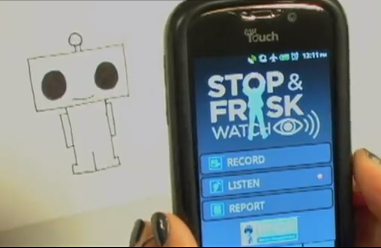 The recitation of facts in Charles' complaint link her actions to the controversial "stop and frisk" policy of the NYPD that she sought to record.  Her allegations also include failure to train law enforcement officers to abide by the department's Patrol Guide as well as the First Amendment.  Ms. Charles was arrested, held for some time, her phone searched, released with a charge of disorderly conduct that was ultimately dismissed.  The complaint also contains allegations that police officers derided Ms. Charles for being a "street lawyer." Ms. Charles is not an attorney, but an HIV activist who has been recognized as a "Champion of Change" by the White House.

A report in Gothamist has more details.

And for those who plan on replicating Ms. Charles' activities, NYCLU has an "app" for that: “Stop and Frisk Watch” includes the ability to record, provide information, and transmit it to the NYCLU.

Listed below are links to weblogs that reference Complaint Against NYPD Alleging Right to Record Police Officers: