As the secession discussion continues, prompted by "petitions" on a White House website as we discussed, it's worth reconsidering Texas' previous secession which was considered by the United States Supreme Court in Texas v. White in 1869.  The underlying issue was ownership of bonds, but resolution depended upon Texas' status.

The Court was forthright about the "rebellion" and armed conflict, but deemed the Union "perpetual" and any acts by a state to break such a bond "null."  There is however, the possibility of "revolution" - - - or, perhaps more intriguingly, "consent of the States." 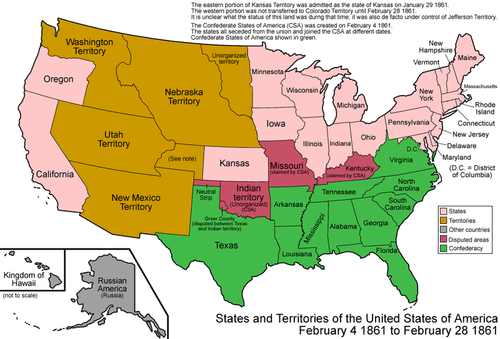 Here are the central passages from Texas v. White:

[During the Civil War], the relations of Texas to the Union were broken up, and new relations to a new government were established for them.

The position thus assumed could only be maintained by arms, and Texas accordingly took part, with the other Confederate States, in the war of the rebellion, which these events made inevitable. During the whole of that war there was no governor, or judge, or any other State officer in Texas, who recognized the National authority. Nor was any officer of the United States permitted to exercise any authority whatever under the National government within the limits of the State, except under the immediate protection of the National military forces.

It is needless to discuss, at length, the question whether the right of a State to withdraw from the Union for any cause, regarded by herself as sufficient, is consistent with the Constitution of the United States.

The Union of the States never was a purely artificial and arbitrary relation. It began among the Colonies, and grew out of common origin, mutual sympathies, kindred principles, similar interests, and geographical relations. It was confirmed and strengthened by the necessities of war, and received definite form, and character, and sanction from the Articles of Confederation. By these the Union was solemnly declared to "be perpetual." And when these Articles were found to be inadequate to the exigencies of the country, the Constitution was ordained "to form a more perfect Union." It is difficult to convey the idea of indissoluble unity more clearly than by these words. What can be indissoluble if a perpetual Union, made more perfect, is not?

But the perpetuity and indissolubility of the Union, by no means implies the loss of distinct and individual existence, or of the right of self-government by the States. Under the Articles of Confederation each State retained its sovereignty, freedom, and independence, and every power, jurisdiction, and right not expressly delegated to the United States. Under the Constitution, though the powers of the States were much restricted, still, all powers not delegated to the United States, nor prohibited to the States, are reserved to the States respectively, or to the people. And we have already had occasion to remark at this term, that "the people of each State compose a State, having its own government, and endowed with all the functions essential to separate and independent existence," and that "without the States in union, there could be no such political body as the United States." Not only, therefore, can there be no loss of separate and independent autonomy to the States, through their union under the Constitution, but it may be not unreasonably said that the preservation of the States, and the maintenance of their governments, are as much within the design and care of the Constitution as the preservation of the Union and the maintenance of the National government. The Constitution, in all its provisions, looks to an indestructible Union, composed of indestructible States.

When, therefore, Texas became one of the United States, she entered into an indissoluble relation. All the obligations of perpetual union, and all the guaranties of republican government in the Union, attached at once to the State. The act which consummated her admission into the Union was something more than a compact; it was the incorporation of a new member into the political body. And it was final. The union between Texas and the other States was as complete, as perpetual, and as indissoluble as the union between the original States. There was no place for reconsideration, or revocation, except through revolution, or through consent of the States.

Considered therefore as transactions under the Constitution, the ordinance of secession, adopted by the convention and ratified by a majority of the citizens of Texas, and all the acts of her legislature intended to give effect to that ordinance, were absolutely null. They were utterly without operation in law. The obligations of the State, as a member of the Union, and of every citizen of the State, as a citizen of the United States, remained perfect and unimpaired. It certainly follows that the State did not cease to be a State, nor her citizens to be citizens of the Union. If this were otherwise, the State must have become foreign, and her citizens foreigners.

Listed below are links to weblogs that reference Texas Secession Redux: