Some people in more than a few states have begun to "petition" to secede from the United States.  Secession does come up from time to time; Texas has been a notable candidate, and in the intrastate context, there were even rumors (and humor) that Long Island might secede from New York. 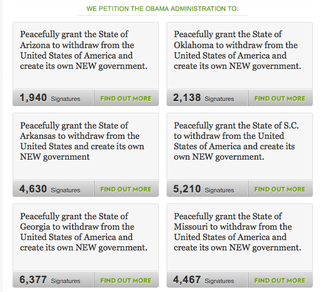 The most recent "attempts" occur on the White House House website, on its "We The People: Your Voice in Government" page.  The page quotes the First Amendment, including the petition clause (Congress shall make no law . . . abridging . . . the right of the people . . . to petition the Government for a redress of grievances).   The page explains:

The right to petition your government is guaranteed by the First Amendment of the United States Constitution. We the People provides a new way to petition the Obama Administration to take action on a range of important issues facing our country. We created We the People because we want to hear from you. If a petition gets enough support, White House staff will review it, ensure it’s sent to the appropriate policy experts, and issue an official response.

Among the petitions, this one from Missouri seems drafted from a common template:

As the founding fathers of the United States of America made clear in the Declaration of Independence in 1776:

"When in the Course of human events, it becomes necessary for one people to dissolve the political bands which have connected them with another, and to assume among the powers of the earth, the separate and equal station to which the Laws of Nature and of Nature's God entitle them, a decent respect to the opinions of mankind requires that they should declare the causes which impel them to the separation."

"...Governments are instituted among Men, deriving their just powers from the consent of the governed, that whenever any Form of Government becomes destructive of these ends, it is the Right of the People to alter or abolish it, and institute new Government..."

However, the one from Arizona alters the second paragraph to state that the

citizens of the great state of Arizona have the right to stand for their principles. That man is granted unalienable rights, which are not the dispensations of the government, but find their beginnings in God and come from God alone. These are the principles that our forefathers stood for, the principles upon, which our Constitution is based, and those in which we firmly place our belief and resolve.

And the one from Tennessee simply reads "Helping the people of Tennessee."

Predictably, there is one from Texas and it stresses Texas:

The US continues to suffer economic difficulties stemming from the federal government's neglect to reform domestic and foreign spending. The citizens of the US suffer from blatant abuses of their rights such as the NDAA, the TSA, etc. Given that the state of Texas maintains a balanced budget and is the 15th largest economy in the world, it is practically feasible for Texas to withdraw from the union, and to do so would protect it's [sic] citizens' standard of living and re-secure their rights and liberties in accordance with the original ideas and beliefs of our founding fathers which are no longer being reflected by the federal government.

Not all the petitions are from "red" states with electoral votes going to the losing Republican candidate in last week's election: there are petitions from residents of Delaware, Pennsylvania, and New Jersey.

The constitutional significance of such petitions is dubious at best, but the goal seems to be provoking a response from the President.

Listed below are links to weblogs that reference Petitioning for Secession:

I think the proper response would be, "be our guest."

Secession petitions are good PR but bad politics. There is a way for states to legally and politically secede from the American union but it must be a state-by-state process established by constitutional secession conventions in each state. Read: http://thedailybell.com/28286/Ron-Holland-Secession-Petitions-Good-PR-But-Bad-Politics