In a divided opinion issued today, the Second Circuit in Windsor v. United States, affirmed the district judge's conclusion that the defense of Marriage Act (DOMA) section 3 is unconstitutional. Recall that the United States position is being defended by BLAG, Bipartisan Leadership Advisory Group, reportedly at a cost to taxpayers of 1.5 million dollars. 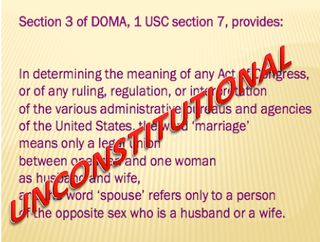 Second Circuit Chief Judge Dennis Jacobs wrote the majority opinion that Judge Droney joined.  The panel held that Windsor had standing, that the suit was not foreclosed by the Court's 1971 summary dismissal in Baker v. Nelson, that DOMA was subject to intermediate scrutiny and that DOMA failed intermediate scrutiny, as well as that there was no need to certify any questions to New York's highest court.

The Second Circuit rejected the district judge's finding that the appropriate level of scrutiny was rational basis, holding that intermediate scrutiny is correct under the basic Carolene Products factors as articulated in Cleburne.  The panel stated:

In this case, all four factors justify heightened scrutiny:

A) homosexuals as a group have historically endured persecution and discrimination; B) homosexuality has no relation to aptitude or ability to contribute to society; C) homosexuals are a discernible group with non-obvious distinguishing characteristics, especially in the subset of those who enter same-sex marriages; and D) the class remains a politically weakened minority.

The panel then applied the classic articulation of intermediate scrutiny, requiring that the "classification must be substantially related to an important government interest."  The panel analyzed BLAG's stated interests - - -the “unique federal interests ” (which include maintaining a consistent federal definition of marriage, protecting the fisc, and avoiding “the unknown consequences of a novel redefinition of a foundational social institution”) and the encouragement of “responsible procreation” - - - noting that at oral argument "BLAG’s counsel all but conceded that these reasons for enacting DOMA may not withstand intermediate scrutiny."  The panel, however, does evaluate the interests, concluding they are not being substantially served by DOMA.

Dissenting Judge Straub, in a lengthy opinion, contends that DOMA merits only rational basis scrutiny and that it satisfies this low standard.

Listed below are links to weblogs that reference Second Circuit Affirms DOMA Unconstitutional: