What is Originalism Again? Scalia and Posner Debate the Meaning of "Legislative" History

The very public disagreements between Antonin Scalia and Richard Posner are of interest to ConLaw because of their relevance to originalism as a constitutional theoretical perspective.

Recall that the book Reading Law: The Interpretation of Legal Texts, co-authored by Antonin Scalia and Bryan Garner, is largely devoted to the question of statutory interpretation, although there are constitutional references peppered throughout, including a passage directed at "living constitutionalism." 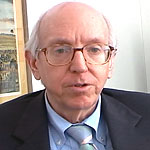 A review of the book in The New Republic by well-known Seventh Circuit Judge Richard Posner (pictured) was overwhelmingly negative and included this passage:

Scalia is a pertinacious critic of the use of legislative history to illuminate statutory meaning; and one reason for his criticism is that a legislature is a hydra-headed body whose members may not share a common view of the interpretive issues likely to be engendered by a statute that they are considering enacting. But when he looks for the original meaning of eighteenth-century constitutional provisions—as he did in his opinion in District of Columbia v. Heller, holding that an ordinance forbidding people to own handguns even for the defense of their homes violated the Second Amendment—Scalia is doing legislative history.

Heller probably is the best-known and the most heavily criticized of Justice Scalia’s opinions. Reading Law is Scalia’s response to the criticism. It is unconvincing.

The discussion escalated, with Justice Scalia stating in an interview, ""To say that I used legislative history is simply, to put it bluntly, a lie."

I had indicated what I meant by legislative history when I had said that in seeking the original eighteenth-century meaning of the text of the Second Amendment Justice Scalia had been doing legislative history. His quest for original meaning had taken him to a variety of English and American sources from which he distilled the existence of a common law right of armed self-defense that he argued had been codified in the Second Amendment. He may not consider such a historical inquiry to be an exercise of “legislative history,” because he defines legislative history very narrowly (and in the interview calls it “garbage”). His coauthor, Bryan Garner, does not define it so. Here is the definition of the term in Black’s Law Dictionary (9th ed. 2009), of which Garner is the editor: “The background and events leading to the enactment of a statute, including hearings, committee reports, and floor debates.” The “background and events leading to the enactment” of the Second Amendment are the focus of the Heller opinion.

Even if I accepted Scalia’s narrow definition of “legislative history” and applied it to his opinion in Heller, I would not be telling a “lie.” For Justice Scalia does discuss the “drafting history” (legislative history in its narrowest sense) of the Second Amendment. See 554 U.S. 598–599, 603–605.

So I would not have been lying, or even mistaken, had I said in my book review that in Heller Scalia “actually resorts” to “legislative history” in its narrowest sense (“drafting history”). But I did not say that.

One might ask whether or not the Constitution has a legislative history?

Yet that question may be less interesting than what is at stake in this dispute, if anything.  ConLawProf Eric Segall, arguing for the dispute's relevance, correctly points out:

In a few months, the Court will likely decide whether the University of Texas may use racial preferences to redress generations of discrimination, and whether Congress may continue to insure that states with a history of voter suppression don't make it harder for minorities to vote. The relevant text and history of these two disputes will be contested and Posner would likely defer to politically accountable officials on both questions. Scalia will almost certainly vote to strike down these efforts to confront our racist past and then claim that neutral canons of constitutional interpretation require him to do so.

For the cynical, this leaves interpretative strategies and theoretical perspectives simply strategies to achieve desired outcomes.  And perhaps that is the relevance of the dispute over legislative history.

Listed below are links to weblogs that reference What is Originalism Again? Scalia and Posner Debate the Meaning of "Legislative" History: