A "dissental" is not the mistake of a first year law student, but the increasingly popular term for an opinion dissenting from a rehearing en banc, with its opposing opinion known as a concurral. 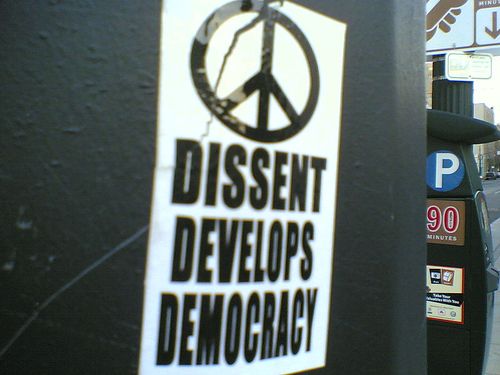 Ninth Circuit Judge Kozinski, himself the author of a fair number of these, has a good discussion of the practice on Yale Law Journal Online (take a look at the pdf of the article for some enlightening charts and statistics).  The Ninth Circuit's practice continues to be spotlighted, including the dissentals and concurrals by Ninth Circuit Judges regarding the rehearing en banc of the panel's divided opinion in United States v. Alvarez on the constitutionality of a provision of the "Stolen Valor" Act.  Recall that the United States Supreme Court ultimately affirmed the Ninth Circuit.

Next month, the Court will hear University of Texas v. Fisher, featuring a dissental from controversial Fifth Circuit Judge Edith Jones, whose opinion outlines the ways in which she believes the panel opinion deviates from Grutter v. Bollinger.

Whether or not "dissentals" contribute to grants of certiorari by the United States Supreme Court is uncertain.  Of course, there is a correlation, but that should be expected if the case is sufficiently important, if statutes are being declared unconstitutional, and if precedent is being cast into doubt. Yet there are certainly a number of counter-examples.

Perhaps more certain is the manner in which "dissentals" or "concurrals" can sharpen the issues.  However, they also risk providing more rhetoric than cogent analysis.

Judge Kozinski also argues that they can also serve to insulate the panel opinion from review, with the "threat" of a dissental prompting a revised panel opinion.

Listed below are links to weblogs that reference The Power of "Dissentals" :