As we discussed earlier this week, the controversial "paid political advertisements" that began appearing at NYC subway stations Monday soon sparked controversy.  Recall that the MTA originally rejected the advertisements because they demeaned an individual or group of individuals on account of race or ethnicity, but lost in federal court when challenged by the advertisements' sponsor. 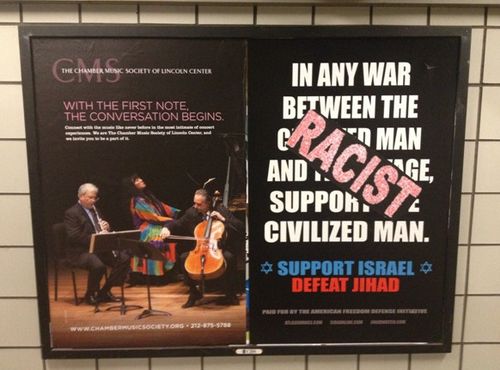 In an emergency meeting yesterday, the MTA promulgated new guidelines, as the NYT reports.

The new guidelines (h/t Gothamist) expand on the previous limitation of advertisements that would be "adverse to the commercial or administrative interests of the MTA or is harmful to the morale of MTA employees" to include an "incitement" provision.  The new amended guideline, subsection (a) x, provides the advertisement will be excluded if:

The advertisement, or any information contained in it, is directly adverse to the commercial or administrative interests of the MTA or is harmful to the morale of MTA employees or contains material the display of which the MTA reasonably foresees would incite or provoke violence or other immediate breach of the peace, and so harm, disrupt, or interfere with safe, efficient, and orderly transit operations.

The federal judge's July opinion and order had invited the MTA to consider a "standard of civility" and expressed the latitude of the MTA "to investigate and experiment with alternative mechanisms for using ad space"  "productively, profitably, and constitutionally, while ensuring that this space is not used as a tool for disparagement and division."   Instead - - - and probably wisely - - - the MTA adopted the more established incitement standard for evaluating restrictions on speech.

Additionally, the MTA added a disclaimer requirement.  The new section (b) ii, provides:

An advertisement that primarily or predominately expresses or advocates a viewpoint on a political, moral, or religious issue or related matter shall include, the following statement: “This is a paid advertisement sponsored by []. The display of this advertisement does not imply MTA’s endorsement of any views expressed.”

Mandated disclosures are also an established First Amendment strategy.  However, the standards' singling out of "viewpoints on a political, moral, or religious issue or related matter" might cause some constitutional consternation.  On the other hand, the MTA has a valid argument that such advertisements are distinct: It would be the rare subway rider who would believe that the MTA endorses "Dr. Zizmor" - - - a ubiquitous NYC subway advertisement - - - but one could mistake a noncommercial advertisement as being one of the many "public service" advertisements.

Of course, the MTA could ban all advertisements, closing the limited public forum. As it reportedly stated: "the MTA does not believe the First Amendment compels the MTA to open up its ad spaces in this way to a wide range of expressive communications."

Listed below are links to weblogs that reference NYC MTA Amends Advertising Standards :