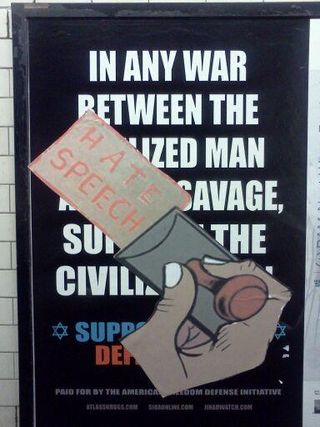 The MTA had originally rejected the adverts by the American Freedom Defense Initiative, an organization devoted to combating the "Islamization of America."  The MTA found the advert did not meet one of its standards: "“contain[] images or information that demean an individual or group of individuals on account of race, color, religion, national origin, ancestry, gender, age, disability or sexual orientation."

In its 35 page opinion in July, District Judge Engelmayer found that the bus advertisements were a designated public forum. The judge then found that the MTA's "demeaning" standard did not survive the Supreme Court's analysis in R.A.V. v. City of St. Paul, 505 U.S. 377 (1992), especially given the advert's content as core political speech.  Thus, the Judge granted the motion for a preliminary injunction enjoining the enforcement of MTA's no-demeaning standard.

The adverts were quickly altered by "vandals," as pictured right, and as a NY1 report explains.

However, there were also more public - - - and arguably less artful - - - attempts to alter the adverts, as in the video below in which a person uses pink spray paint and is intercepted by a photographer, all of which is recorded:

These incidents reflect back to the closing section of Judge Engelmayer's opinion: "Today’s ruling does not disable city authorities from adopting rules that hold ads and commentary" to a "standard of civility." He believed the ruling "instead leaves—and is intended to leave—MTA the latitude to investigate and experiment with alternative mechanisms for using ad space"   "productively, profitably, and constitutionally, while ensuring that this space is not used as a tool for disparagement and division."

These incidents also call into play other standards of advertising in the MTA policy mentioned in the opinion, prohibiting adverts that "the public would find to be offensive or improper" and "are adverse to MTA’s commercial or administrative interests, or its employees’ morale."

For those teaching First Amendment, this would make a great problem or in-class discussion.

Listed below are links to weblogs that reference "More Speech" or Vandalism? First Amendment and Political Advertising: