Affirming the district judge's grant of summary judgment in favor of the city, the Second Circuit's opinion today in Marcavage v. City of New York rejects the claim of two participants at the 2004 Republican National Convention protests that their First and Fourth Amendment rights were violated. 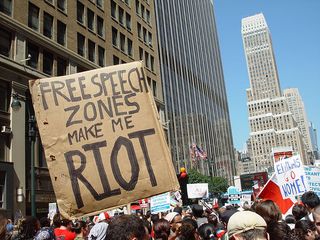 The controversy involves an often-called "free speech zone" used by law enforcement to designate areas for protest.  As the Second Circuit opinion explains, the "NYPD implemented a three-zone system" outside of Madison Square Garden where the convention was held:  "a demonstration area, a frozen area (with no pedestrian traffic), and a no-demonstration area."   The plaintiffs were "standing in the no-demonstration zone between 32nd and 33rd Streets, holding anti-abortion signs--one sign was four by six feet, the other was three by five."   When told to move into the demonstration zone, the protesters objected that this was not within the sight and sound of the Convention attendees and "they did not want to be in the demonstration zone lumped with other demonstrators."   According to the Second Circuit, the protesters were "ordered to leave 17 times by three different police officers before they were informed that they were blocking traffic and placed under arrest."  They were both charged with disorderly conduct; one with resisting arrest; and all charges were ultimately dismissed.

Relying upon Ward v. Rock Against Racism, 491 U.S. 781, 790-91 (1989), the panel analyzed whether plaintiffs were engaged in First Amendment protected activity in a traditional public forum, and if the restriction on speech was unrelated to content.   The panel easily found that the first two prongs were satisfied, and noted that the plaintiffs conceded that the restraint on their expressive activity was content-neutral.  Thus, the restriction needed to be narrowly tailored to serve a significant governmental interest, and leave open ample alternative channels for communication of the information.

The panel emphasized the security concerns, invoking terrorism, and finding that NYC had significant, if not compelling, interests.  Further, while the NYPD could have made different judgments: "“narrowly tailored”does not mean the “least restrictive or least intrusive means" and "simply because there is some imaginable alternative that might be less burdensome on speech" does not render the restriction invalid."   As for the alternative channels, the panel described it as "a demonstration zone  spanning the width of Eighth Avenue, starting at the southwest corner of the Garden, one avenue from the primary entrance to the Garden. The zone was equipped with a stage and sound amplification equipment, which all the protesters (including Plaintiffs) were free to use."   This zone need not be within the "sight and sound" of the intended audience, as a constitutional matter.

On the Fourth Amendment claim, the panel interestingly relied on an audio recording made by the plaintiffs themselves:

that recording dooms their assertion . . . . even viewed  in the light most favorable to Plaintiffs, the audio recording shows indisputably that they were neither courteous nor compliant. Plaintiffs were hostile and non-compliant; in effect, they courted arrest.

With this, the panel found no need to extensively discuss the district judge's grant of summary judgment on the Fourth Amendment issue.

The Second Circuit's opinion is yet another one upholding free-speech zones for political protest, certainly to be a law enforcement practice yet again in the upcoming national political conventions.

Listed below are links to weblogs that reference Second Circuit Upholds Arrests at 2004 Republican National Convention in NYC: