As in oral arguments, the Court's opinion today in Reichele v. Howards puts the First Amendment in the "back seat."  In the front seat is the doctrine of qualified immunity, specifically the requirement that any claimed violation be a matter of clearly settled law.

As the relatively brief opinion for a unanimous Court, authored by Justice Clarence Thomas (pictured below) explains:

We granted certiorari on two questions: whether a First Amendment retaliatory arrest claim may lie despite the presence of probable cause to support the arrest, and whether clearly established law at the time of Howards’ arrest so held.  If the answer to either question is “no,” then the agents are entitled to qualified immunity. We elect to address only the second question. We conclude that, at the time of Howards’ arrest, it was not clearly established that an arrest supported by probable cause could violate the First Amendment.

Recall the rather unique facts: 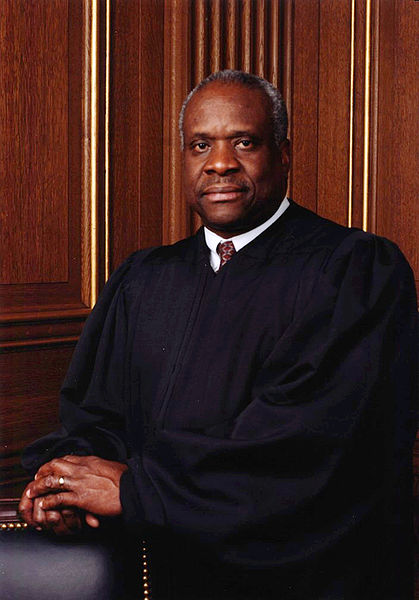 Howards' arrest was by Secret Service agents at a mall in Colorado where then-VP Dick Cheney was appearing.  Howards was taking his son to a piano recital at the mall and on his cell phone.  Apparently, no fan of the VP, Howards stated into his cell phone, "I'm going to ask him [the Vice President] how many kids he's killed today."

This was overheard by the Secret Service agents and attracted their attention.  Moreover, Mr. Howards did make good on his stated intentions:  After dropping off his son at the recital:

Interestingly, Mr. Howards was not arrested then, but quite a while later when agent Reichele and Howards had an "interview" which escalated, with the agent becoming angry.  The agent arrested Howards for assault on the Vice-President, based on the touching of the shoulder, which Howards had "lied" about saying he hadn't touched the VP.

Nevertheless, I concur in the Court’s judgment. Officers assigned to protect public officials must make singularly swift, on the spot, decisions whether the safety of the person they are guarding is in jeopardy. In performing that protective function, they rightly take into account words spoken to, or in the proximity of, the person whose safety is their charge. Whatever the views of Secret Service Agents Reichle and Doyle on the administration’s policies in Iraq, they were duty bound to take the content of Howards’ statements into account in determining whether he posed an immediate threat to the Vice President’s physical security. Retaliatory animus cannot be inferred from the assessment they made in that regard. If rational, that assessment should not expose them to claims for civil damages.

While Reichele v. Howards is a unanimous opinion, it refuses to do what we often expect unanimous opinions to do: clarify the law.  By addressing only the second question - - - whether the law was settled or not - - - and not addressing the substantive question, the law remains unsettled.

Nevertheless, the clear import of the case is deference to law enforcement, including (or especially) Secret Service agents, against civil damages even if their actions may seem "retaliatory."