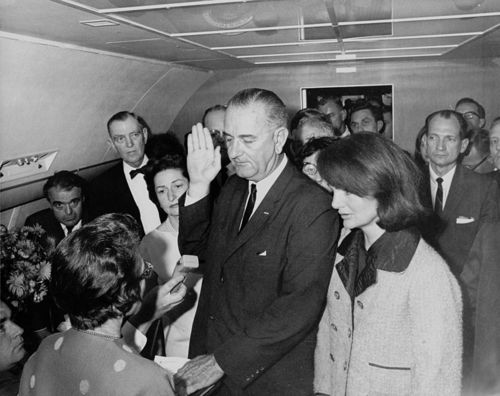 The book of the week is definitely Robert Caro's fourth (and next to last) volume of the biography of Lyndon Baines Johnson, the 36th United States president.  In over 700 pages, Caro discusses and documents five tumultuous years in the life of LBJ - - - and in the nation's life - - - roughly from 1960 until 1964.

It's a period that includes the assination of JFK with LBJ assuming the presidency.  LBJ's oath of office, observed by Jackie Kennedy, is captured in an iconic photograph (right via).  Caro's details of the event are based in part on interviews with the photographer.

The NYT Sunday book review has a front page review by the United State's 42nd president, Bill Clinton. In a passage that might give some pause given Clinton's own problems, Clinton writes:

As Caro shows in this and his preceding volumes, power ultimately reveals character. For L.B.J., becoming president freed him to embrace parts of his past that, for political or other reasons, had remained under wraps. Suddenly there was no longer a reason to dissociate himself from the poverty and failure of his childhood. Power released the source of Johnson’s humanity.

The NYT also has a review by Michiko Kakutani and a worth watching, if quite brief, video discussion between NYT's Sam Tanenhaus and author Robert Caro.

NPR also has a terrific review as well as an excellent interview by Steve Inskeep with Caro, stressing his writing process.  Inskeep provides more insight and his own observations, including critiques of Caro's work, in an essay in The Washington Post.  C-Span will air a two-part interview with Caro.

Caro vows to finish the final volume of the biography, which will cover the period until LBJ's death in 1973.  It will undoubtedly include LBJ's nomination and the Senate's confirmation of Thurgood Marshall to the United States Supreme Court.

Listed below are links to weblogs that reference Sunday Book Review: Robert Caro on LBJ: