The Seventh Circuit in ACLU v Alvarez has instructed the district court to enjoin Illinois broad "eavesdropping statute" from being applied to a "police accountability" recording program in Chicago.

Illinois has one of the most severe wiretapping statutes under which, as the Seventh Circuit noted, might allow "silent video of police officers performing their duties in public; turning on a microphone, however, triggers class 1 felony punishment." 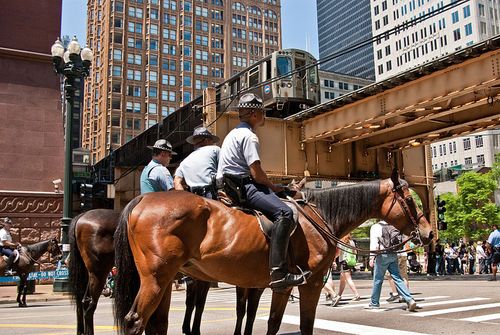 The majority of the panel phrased the question as "whether the First Amendment prevents Illinois prosecutors from enforcing the eaves- dropping statute against people who openly record police officers performing their official duties in public."  The American Civil Liberties Union of Illinois (“ACLU”) challenged the statute as applied to the organization’s Chicago-area “police accountability program,” which "includes a plan to openly make audio- visual recordings of police officers performing their duties in public places and speaking at a volume audible to bystanders."

The majority reasoned that the

the State’s Attorney relies on the government’s interest in protecting conversational privacy, but that interest is not implicated when police officers are performing their duties in public places and engaging in public communications audible to persons who witness the events. Even under the more lenient intermediate standard of scrutiny applicable to content- neutral burdens on speech, this application of the statute very likely flunks. The Illinois eavesdropping statute restricts far more speech than necessary to protect legitimate privacy interests; as applied to the facts alleged here, it likely violates the First Amendment’s free- speech and free-press guarantees.

The majority supported this conclusion in a lengthy and closely argued analysis, peppered with scholarly citations as well as cases.  It noted that the "First Circuit agrees," citing and discussing Glik v. Cunniffe.

Posner's dissent was predictable given his stance during the oral arguments in which he expressed disdain for a "civil rights" group ever having anything useful to say regarding police practices.  He  highlighted the procedural posture of the case (a preliminary injunction) and the presumed constitutionality of statutes unless a judge has a "gut feeling" regarding the statute.  On the substance, he stressed the privacy interests of the persons engaged with police officers.

RR
[Chicago Police Officers on horeseback near "El" via]

Listed below are links to weblogs that reference Recording Police A First Amendment Right: Seventh Circuit Weighs In: