OWS Complaint for Destruction of Books Filed in Federal Court

The November 15, 2011 police "eviction" of members of Occupy Wall Street from Zucotti Park prompted quick legal action resulting in a TRO, and today, months later, a complaint in federal court raising constitutional and state law challenges to the confiscation of the materials in the OWS library. 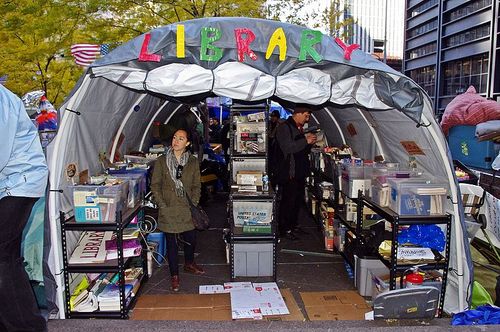 In their complaint in Occupy Wall Street v. City of New York, the plaintiffs allege that city officials seized 3,600 books, only 1,003 of which were returned, and 201 of those very damaged.  The constitutional claims include a violation of the Fourth Amendment, a violation of procedural due process, and a violation of the First Amendment.  The plaintiffs also allege these violations occurred because of a lack of supervision and training, a claim that has become more and more difficult to sustain.  The plaintiffs also make parallel claims under the pertinent New York state constitution, as well as common law claims of conversion and replevin.

Listed below are links to weblogs that reference OWS Complaint for Destruction of Books Filed in Federal Court:

Shows how dangerous ideas are thought to be.