As ConLawProf Sandy Levinson rightly observes in an Op-Ed in today's NYT, "the Constitution is enveloped in near religious veneration."  Although perhaps this isn't so right, at least in some circles.

His own op-ed, for example, argues that the Constitution itself is responsible for current political pathologies. He singles out the Electoral College and the composition of the Senate for special note, both of which result in states such as New York, California, and Texas being diminished. 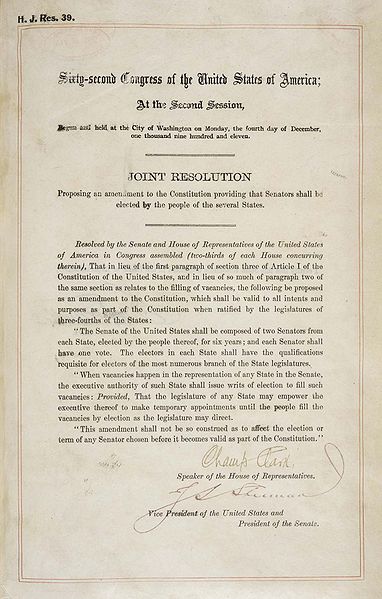 This incorrect equality amongst states is also highlighted by Kevin Bleyer in his new book, Me The People.  To be sure, Bleyer is a comedy writer, but as he argues in the recent excerpt in Salon, "despite what the original Constitution of the United States says about the qualifications for statehood and the guarantee of representation," there are just some states that don't deserve their status.  One rationale for such disrespect: there are "more Americans in prison than in Nebraska."

For his part, Sandy Levinson focuses on Article V as "the worst single part of the Constitution" because it has made the US Constitution "among the most difficult to amend of any in the world."   He argues that the "near impossibility of amending the national Constitution not only prevents needed reforms; it also makes discussion seem futile and generates a complacent denial that there is anything to be concerned about."

As the St. Louis Beacon reports, Senate hopeful (and current US Representative) Todd Akin thought a repeal of the Seventeenth Amendment might shift the balance back towards "states rights."  The other candidates were less interested in the issue.  Their respective statements are available on YouTube, linked at the St Louis Beacon article.  And there are certainly more scholarly discussions, including one between Todd J. Zywicki and Ilya Somin hosted by the Federalist Society last year.

For those participating in summer institutes for undergraduates or comparative law programs, there is much fodder here.

Listed below are links to weblogs that reference Constitution Bashing?: