Common Cause Sues to End the Filibuster

Common Cause led a group of plaintiffs today in filing suit against Senate officers to end the filibuster.  Common Cause, joined by four members of the House of Representatives and three private citizens, sued Senate President Joe Biden and the Secretary, Parliamentarian, and Sergeant-at-Arms of the U.S. Senate in the U.S. District Court for the District of Columbia for declaratory and injunctive relief in an effort to end the super-majority 60-vote requirement to end debate in Senate Rule XXII.

The filibuster is the bane of every Senate majority, especially in recent times, when nearly every piece of significant legislation, and much else, requires a 60-vote majority in the Senate.  Add secret holds, and the filibuster becomes a devilish and secretive way for the minority--and even just one anonymous Senator--to hold up legislation, nominations, and Senate business, without even stating why.  But the Senate itself isn't suited to undo the super-majority requirement, even if it could.  (That, as it turns out, could be quite a trick itself.)

Enter Common Cause.  It argues that a minority in the Senate has used the filibuster to hold up all manner of legislation, including (most importantly, for this suit), the DISCLOSE Act (to tighten electioneering disclosure requirements in the wake of Citizens United) and the DREAM Act (to create a path to U.S. citizenship for certain aliens).  It argues that the 60-vote requirement in Senate Rule XXII violates the default parliamentary majority-takes-all rule, the careful balance of powers in the legislative branch and between the three branches, and the power of the Senate itself to changes its own rules (because along with Rule V (which continues the Senate rules from Senate to Senate) Rule XXII seems to require that 3/5 of Senators vote to change Rule XXII).  In particular, Common Cause argues that the filibuster violates the Quorum Clause, the Presentment Clause, the power of the VP to break a Senate tie, the Advice and Consent Clause, and the equal representation of the states in the Senate--all of which in different ways assume majority rule.  It also argues that the filibuster is in tension with the eight constitutional exceptions to majority rule. 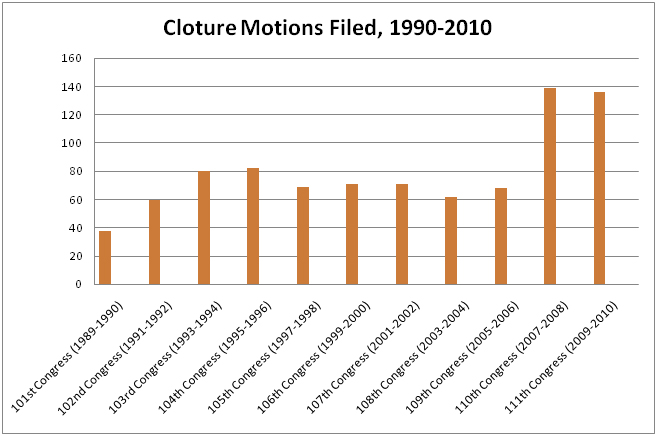 The plaintiffs ask the court to excise just the italicized portion of Rule XXII and otherwise leave it unaltered:

There are obvious and significant justiciability issues with the suit.  Common Cause addresses some of them in the complaint and tries to cover its bases with the range of plaintiffs and alleged harms.  But still, justiciability will be a major barrier to getting a court to hear the case on the merits.

At the very least, though, the case will help publicize the problem of misuse of the filibuster.  And with enough publicity, who knows?  Maybe the Senate will be inspired to find a political solution.

Listed below are links to weblogs that reference Common Cause Sues to End the Filibuster: