Rehnquist on Jefferson - - - and life tenure on the Supreme Court

For the anniversary of the birth of Thomas Jefferson, born in Virginia April 13, 1743, one might celebrate by reading any number of books and articles about Thomas Jefferson's life, theorizing, and work, including The Hemingses of Monticello by Annette Gordon-Reed. 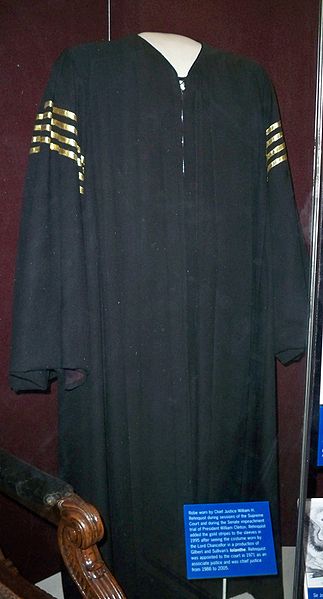 There is also this small gem from Chief Justice William Rehnquist, writing in 1993: Thomas Jefferson and his Contemporaries, 9 Journal of Law & Politics 595 (available on hein, lexis, and westlaw).  Situating Jefferson in the controversies of the time, Rehnquist discusses the election of 1800, the impeachment trial of Justice Salmon Chase, and the oft-forgotten trial of Aaron Burr for treason over which Justice John Marshall presided.   Rehnquist wrote:

Jefferson reacted to Marshall's rulings by intimating that by quashing certain evidence, Marshall had intended from the very beginning of the trial to acquit Burr. His private letters refer to the “will of the judge”, “chicanery”, and, perhaps his lifelong favorite characterization of any Marshall ruling—“sophistry.” Jefferson proposed a remedy for what he saw as improper judicial partisanship, first by suggesting privately the necessity for a constitutional amendment to make it easier to remove federal judges, and second, by making a thinly veiled threat against Marshall in his annual message to Congress. Despite these suggestions and despite the introduction of a number of proposed amendments to change the judiciary's life tenure or make removal easier, Jefferson did not press the issue and Congress let the matter lie. . . . the struggle between the judiciary and the other two branches during Jefferson's presidency resulted in “a sort of drawn battle,” with no real change to the status quo ante bellum.

This "sort of drawn battle" is still ongoing.  There are many recent suggestions (e.g., here here) that federal judges should no longer have life tenure.  Controversial cases such as Bush v. Gore, Citizens United, and the pending ACA decision - - - like the treason charge against Aaron Burr - - - provoke reconsideration of the meaning of Article III.

Listed below are links to weblogs that reference Rehnquist on Jefferson - - - and life tenure on the Supreme Court: