Has Scalia Crossed a Line in Arizona v. United States?

Justice Scalia, long known for his scathing written opinions, is under increasing scrutiny - - - and criticism - - - for his comments/questions during oral arguments.  The critiques focus on both content and tone of his performance on the Bench and are especially pronounced with regard to Arizona v. United States, the case involving the constitutionality of certain sections of Arizona's notorious immigration law known as SB1070.  As we discussed, the oral arguments seemed less about preemption (a sometimes technical and dry issue) and more about federalism and immigration policy unmoored from the statutory and Supremacy Clause considerations.

In a case about borders, several commentators are suggesting that Scalia needs to better monitor his own boundaries. 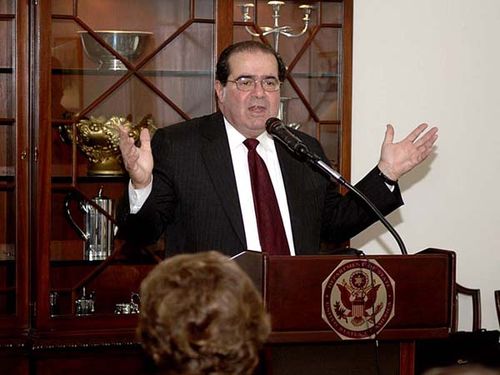 For example, Dana Millbank in a Washington Post column compares Scalia's rhetoric to that of the "street protestors" stating that they were "nearly identical" in "tone and substance."  Millbank argues that although "[t]echnically, Scalia was questioning counsel," at times "he verged on outright heckling" of the Solicitor General.

Similarly, in an article in UK's the Guardian, US political science professor Scott Lumieux notes that Scalia's remarks in Arizona v. United States were "yet more Fox News-style posturing by Scalia," continuing a pattern Lumieux also discusses from recent oral arguments including those concerning the constitutionality of the individual mandate provision of the ACA.

And in a article entitled "Scalia Reveals How Little He Knows About Immigration Policy," Neil Pippenger in The New Republic refrains from characterizing Scalia's tone, but relates Scalia's "policy suggestion" intended to solve Mexico's objections:

A few people sitting near me gasped as Scalia continued: “Look, free them from the jails”—here, [Solicitor General] Verrilli tried to interrupt him, but the justice would not be cut off—“and send them back to the countries that are objecting!”

An mp3 and transcript of the oral arguments in Arizona v. United States is now available at Oyez, so one can hear and read the basis for such criticisms.  Of course, without visual broadcast, those not in the courtroom must rely on the representations of others in that regard.  However, the transcript and audio certainly lend credence to the critiques.

Listed below are links to weblogs that reference Has Scalia Crossed a Line in Arizona v. United States?:

I don't think so.

The best way to solve most of our problems in the U S would be to send Thomas and Scaila across the border to Mexico.