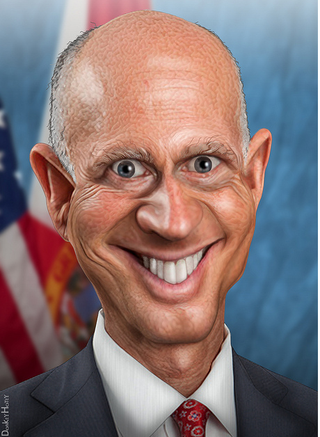 Judge Ursula Ungaro of the Southern District of Florida has permanently enjoined the Executive of Order of controversial Florida Governor Rick Scott (pictured in caricature at right) requiring drug testing of all prospective state employees and random testing of all state employees in her opinion in AFSCME v. Scott.

Scott's fondness for drug-testing has not fared well in the federal courts.  His previous efforts to have all public entitlement recipients drug-tested was similarly enjoined as unconstitutional last year.  In this opinion, Judge Ungaro distinguishes the drug-testing policies that were upheld under the Fourth Amendment as being tailored to address a specific, serious problem.  "In contrast, the rationale for the Governor’s policy consists of broad prognostications concerning taxpayer savings, improved public service, and reductions in health and safety risks that result from a drug-free workplace."  Judge Urango stated that his  "explanation of the EO’s concern with public safety offers a particularly telling example of the speculative nature of the public interest behind the testing policy," quoting from the brief that:

Even a desk-bound clerk may become violent with other employees or the public, may present a danger when driving in a car in the workplace parking lot, or may exercise impaired judgment when encountering any of the myriad hazards that exist in the workplace environment (from stacks of heavy boxes, to high staircases, to files in high shelves, to wet floors, to elevators and escalators.)

For Judge Ungaro, "the Governor’s safety rationale for the EO essentially relies on the Governor's common sense belief that because illegal drug use exists in the general population, it must also exist among state employees."   Common sense as articulated by the state's governor is not weighed heavily in evaluating a drug-testing program, unsupported by any individualized suspicion, that is "judged by balancing its intrusion on the individual's Fourth Amendment interests against its promotion of legitimate governmental interests."

The judge also rejected the Governor's analogy to financial disclosure statements by government employees: "the Governor’s reasoning is hardly transparent and frankly obscure."

Before reaching the substantive Fourth Amendment claim, the judge carefully considered the standing of AFSCME, a union, to bring the action.  Governor Scott argued that the union did not suffer an "injury in fact" because only the individuals who actually have a Fourth Amendment right are injured, not an association.  However, the judge found convincing the union's argument that it would have to devote considerable energy to representing individual union members selected for testing and will have to devote similar energies to engage in collective bargaining on the issue, deflecting its energies from other issues.  Moreover, the judge found the union had associational standing to assert the rights of its members.  As to new hires, who are not union members, the judge found that the new hires could be union members by the time of the testing, and that new hires included union members who were applying for transfers or promotions.

This well-crafted opinion is certainly a blow to Governor Scott's controversial and somewhat breezy approach to law.  Rather than appeal to the Eleventh Circuit, perhaps Scott will attempt a more carefully crafted Executive Order.

RR
[image: Caricature of Governor Rick Scott by DonkeyHotey via]

Listed below are links to weblogs that reference Florida's Mandatory Drug Testing for State Employees Enjoined:

What worries me is the Try-Try-Again approach. Sooner or later some of these laws will stick, and the actual decreased privacy leads to a decreased expectation of privacy. This invasion will feed on itself.

Kudos to Judge Ungaro for seeing through the "public safety concerns."

Very good article, thanks for posting.