The complaint filed today in the Southern District of New York in Berg v. Kelly (as NYC Police Commissioner), also naming as defendants a number of NYC Police Officers, claims violations of the First, Fourth, and Fourteenth Amendments for actions of the NYPD during an Occupy Wall Street (OWS) protest on November 30, 2011. The alleged facts are thet the NYPD detained the plaintiffs "for nearly two hours inside an interlocking metal barricade" and prohibited them from exiting the pen, although it allowed  "tourists and journalists to leave."

The real gravamen of the complaint, however, is that the NYPD violated its settlement in Stauber v. The City of New York, and the NYPD Patrol Guide provisions that the NYPD agreed to inserts in its manuals as a result of that settlement.  One such provision is alleged to be:

Barrier configuration for demonstrations should not unreasonably restrict access to and participation in the event. For example, attendees should be permitted to leave a barricaded area at any time. In addition, if crowd conditions and other circumstances permit, participants should be permitted to leave and return to the same area. Sufficient openings in the barricades should be maintained for purpose of permitted attendees to leave expeditiously and return to the event as described in this paragraph.

Under this language, the facts alleged are certainly in violation, leaving the First, Fourth, and Fourteenth Amendment arguments ancillary.  Also compare the  European Court of Human Rights opinion from last month that found no violation by British law enforcement's practice of kettling during a demonstration. 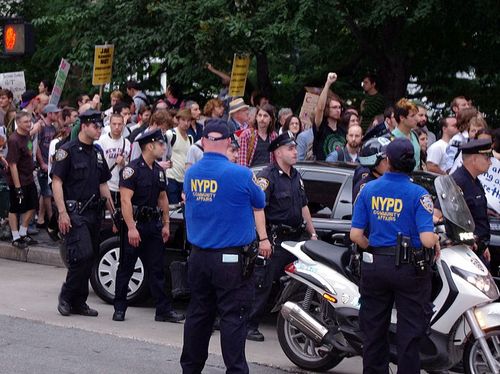 Listed below are links to weblogs that reference Complaint Against NYPD for Barricading OWS Protesters: