In considering the dues witholding provision, Judge Conley noted that

Act 10 was enacted in the maelstrom of a political sea change in Wisconsin, the Act itself being the principal lightening rod around which the tumult reached its heights, at least to date. Whether or not the prohibition on automatic dues deductions for most public unions, but not those who supported the new Governor and Legislature, was an intentional act to suppress the speech of those who opposed then, it has that appearance. 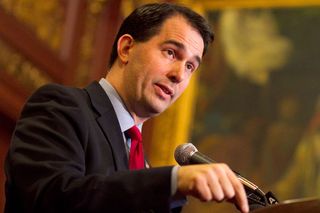 The "maelstrom" to which Judge Conley referred is ongoing.  The state Government Accountability Board has just unanimously ordered a recall election for Governor Scott Walker (pictured above) who spearheaded Act 10.  Earlier this month, a state judge held Wisconsin's voter identification law unconstitutional under the state constitution, a ruling that is being appealed to Wisconsin's troubled Supreme Court.

Judge Conley's order required "a return to automatic dues deductions for all members of public unions no later than May 31, 2012," in order to "give sufficient time for the defendants to seek a stay of this injunction from the Seventh Circuit Court of Appeals, and for government entities to adopt a workable procedure to return to automatic deductions should the Seventh Circuit deny a stay, while balancing the plaintiffs’ and their now-voluntary members’ rights to a return to payroll deductions."

Listed below are links to weblogs that reference Wisconsin's Restrictions on Collective Bargaining Declared Unconstitutional by Federal Judge: