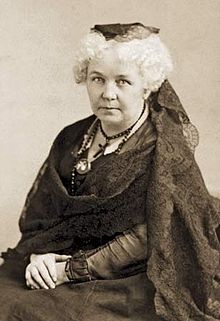 Feminist icon Elizabeth Cady Stanton (pictured right) is frequently portrayed as an anti-abortion.  For example, bills such as The Susan B. Anthony and Frederick Douglass Act of 2011, H.R. 3541, and The Elizabeth Cady Stanton Pregnant and Parenting Students Services Act of 2005, S.1966, H.R. 4265, co-sponsored by 2012 Republican Presidential candidate Rick Santorum, sought to limit abortion and other reproductive rights in the name of Stanton (as well as anti-slavery hero Frederick Douglas).   Stanton's supposed anti-abortion views are also frequently cited in Supreme Court briefs to defeat an argument that abortion is central to women's rights by noting that early feminists were against the practice.

But was Stanton actually anti-abortion?

Professor Tracy Thomas argues that Stanton is an unlikely - - - and inappropriate - - - poster woman for the contemporary anti-abortion movement in a new paper entitled Misappropriating Women’s History in the Law and Politics of Abortion.   According to Professor Thomas, Stanton "did not talk about abortion per se" and "did not respond to the public campaign for the criminalization of abortion led by the medical profession with attacks on the growing autonomy of women."   Instead,

Stanton turned this debate to her priority of women’s rights, framing the question as one of the “elevation of woman” through equal legal and social rights. Stanton’s theory of “enlightened motherhood” placed women as the “sovereign of her own person” with sole responsibility for deciding when and under what circumstances to bear children. She defended women accused of infanticide, exposing the gendered legal system of all-male juries, legislatures, and judges that condemned them. Stanton’s life work labored for radical change to the patriarchy of society seeking liberal legal reforms of equal rights for women. Her ideology was about the “self-sovereignty” of women and against the regulation of women by men or the law.

Of course, Stanton was not one of the framers of the Fourteenth Amendment and indeed, she refused to support the Amendment given its exclusion of women.  Nevertheless, Stanton's "originalist" views on the rights of women are often invoked and Tracy Thomas has provided vital historical sources, analysis, and arguments regarding Stanton's position.

Thomas' article is sure to provoke its own analysis and arguments, and equally sure to be an important contribution in contemporary debates regarding the legal regulation of abortion.  It's a must-read for any scholar working on this controversial constitutional area.

RR
[image of Elizabeth Cady Stanton circa 1880 via]

Listed below are links to weblogs that reference Saturday Evening Review: What Would Elizabeth Cady Stanton Say?: