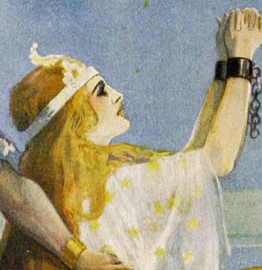 During oral arguments in the Supreme Court today, the First Amendment took a definite back seat. The case is Reichle v. Howards, on certiorari from the Tenth Circuit, and involved Howard's arrest by Secret Service agents at a mall in Colorado where then-VP Dick Cheney was appearing.  Howard was taking his son to a piano recital at the mall and on his cell phone.  Apparently, no fan of the VP, Howards stated into his cell phone, "I'm going to ask him [the Vice President] how many kids he's killed today."

This was overheard by the Secret Service agents and attracted their attention.  Moreover, Mr. Howards did make good on his stated intentions:  After dropping off his son at the recital,

Interestingly, Mr. Howards was not arrested then, but quite a while later when agent Reichele and Howards had an "interview" which escalated, with the agent becoming angry.  The agent arrested Howards for assault on the Vice-President, based on the touching of the shoulder, which Howards has "lied" about saying he hadn't touched the VP.

As Sean Gallagher, arguing for the Secret Service agents stated:

Virtually everyone that a Secret Service  agent encounters when he is protecting the President or the Vice President can allege that they are engaged in free speech. So for Secret Service agents in particular, they -- they can legitimately evaluate what someone is saying in order to determine a particular threat level.

During the argument on behalf of Howards by David Lane, Justice Sotomayor stated:

You do understand that this case is inviting the questions the Chief Justice asked, which, and which has -- Justice Breyer and some of us are concerned about, which is what your adversary has described as First Amendment voicing is going to be a part of many, many arrests.

Near the end of his argument, Lane made a plea for the First Amendment to be recognized:

The issue simply is can we sacrifice the First Amendment. You know, does a litterbug lose their right to have First Amendment free speech?
Does a jaywalker lose their right to have First Amendment free speech because probable cause exists to believe they've committed some offense? And you'll have officers ostensibly enforcing litter laws and jaywalking laws and blocking the sidewalk laws, and the First Amendment is essentially evaded.
100 years of jurisprudence, courageous jurisprudence, many times by this Court, goes by the boards because somebody is a litterbug. I -- I just don't see that as the solution to this problem. And I also don't see that the Secret Service needs some enhanced protection from this Court when this has never been and is not now any kind of a serious problem.
The status quo is not healthy. It has worked for decades and it should continue to work. And if these agents get tagged in this case, maybe they deserved to get tagged in this case, because the First Amendment is extremely important. And I don't denigrate the -- the job of law enforcement or -- or these agents in any way. . . . .

The Justices, however, seemed more than willing to defer to the Secret Service agents, who have recently had the scope of their protective responsibilities widened by Congress.

Here is an article that takes a different and interesting perspective.
http://www.denverlawreview.org/students-comments/2012/3/27/preview-policing-the-police-protecting-civil-remedies-in-cas.html

Interesting case. What is more interesting is that if Howards was actually charged with something and he pleaded guilty to anything or he was admitted to a diversionary program, then he would have no case at all for a civil rights violation. I just posted about such a case in the Third Circuit on my blog: http://www.raffandraff.com/2012/04/19/admission-to-pti-bars-a-civil-rights-claim-against-police/

Originally, the First Amendment applied only to laws enacted by the Congress. However, starting with Gitlow v. New York, the Supreme Court has applied the First Amendment to each state. This was done through the Due Process Clause of the Fourteenth Amendment. The Court has also recognized a series of exceptions to provisions protecting the freedom of speech.