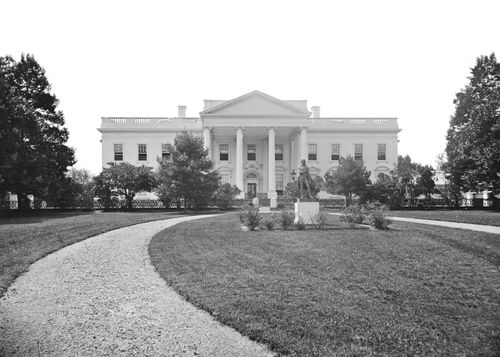 An act being criticized as curtailing First Amendment rights, Congress has passed and presented to the President the Federal Restricted Buildings and Grounds Improvement Act.  The proposed act would amend 18 USC §1752 to read as follows:

The term "restricted building is defined rather broadly in subsection (c) as "any posted, cordoned off, or otherwise restricted area—

The term "other person protected by the Secret Service" is defined as "any person whom the United States Secret Service is authorized to protect under section 3056 of this title or by Presidential memorandum, when such person has not declined such protection.’’

The general punishment is a fine or imprisonment of not more than a year or both, with an enhancement for weapons or significant boldily injury.

The House Report discusses two needs for the revised act.  First, this Act expressly includes the White House and Vice-President's residence, specifics that are not included in the present act.  Second, and more controversially, the act "clarifies" that it should "apply to those who knowingly enter or remain in any restricted building or grounds without lawful authority to do so. Current law does not include this important element."

Congress grounds its power to pass the act in the necessary and proper clause, Art. I, §8 cl. 18.

Like the act protecting the Supreme Court building and environs, this act has the potential to chill protest, and is sure to provoke similar constitutional challenges.

Listed below are links to weblogs that reference Federal Restricted Buildings and Grounds Improvement Act Presented to President:

NYC street artist/ First Amendment warrior Robert Lederman won the right a few years ago to hand out leaflets on the steps of the Capitol Building. This is a huge step backward!

Wow, I guess Americans must begin moving to Egypt, Mexico, Brazil some where in the Middle East to have real freedom of speech? At least they are allowed to demonstrate...Sure they may be shot at...but then, so are Americans.