The Wild Free-Roaming Horses and Burros Act gives the Bureau of Land Management (BLM) authority over wild horses on federal lands.  The BLM controls overpopulation by conducting horse gathers, also known as roundups, and although the BLM "allows the public to observe horse gathers" it "restricts the viewing locations to protect the public from wild horses, helicopters, and vehicles." 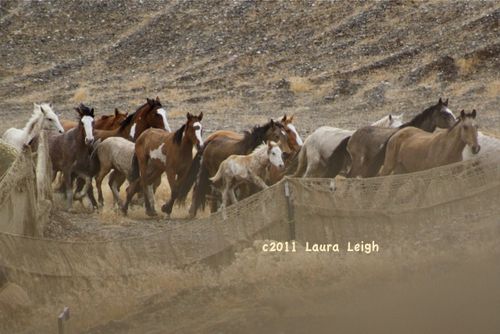 Laura Leigh is a photojournalist and wild horse advocate who sought access to a gather at Silver King (in Nevada) but was limited to a designated viewing area.  She sought a preliminary injunction, arguing a violation of her First Amendment rights, which the district judge denied on grounds of mootness and unlikelihood to prevail on the merits.  In its opinion in Leigh v. Salazar, the Ninth Circuit reversed and remanded.

On the mootness issue, the panel found that Leigh's complaint was not limited to the 2010 gather, but all gathers at Silver King, and given the fact that the BLM did not capture all the horses, there was a "real possibility" of another gather at Silver King pursuant to the BLM's responsibility to "“immediately remove” "excess horses from overpopulated federal lands."

On the substantive First Amendment claim, a majority of the panel held that the district judge needed to conduct the rigorous scrutiny demanded by Press-Enterprise Co. v. Superior Court, generally known as “Press-Enterprise II” (1986).  the Ninth Circuit rejected any limitation of Press-Enterprise II to criminal trials, and found the proper standard to be:

First, the court must determine whether a right of access attaches to the government
proceeding or activity by considering 1) “whether the place and process have historically been open to the press and general public” and 2) “whether public access plays a significant positive role in the functioning of the particular process in question.”

Second, if the court determines that a qualified right applies, the government may overcome that right only by demonstrating “an overriding interest based on findings that closure is essential to preserve higher values and is narrowly tailored to serve that interest.”

Judge Wallace concurring and dissenting in part, agreeing as to the Free Enterprise II standard, but finding that Leigh did not show the gathers were "historically open to the press and public."  On that basis, Judge Wallace argued that the remand should be to decide the permanent rather than preliminary injunction.

RR
[image via, used with permission of Laura Leigh].

Listed below are links to weblogs that reference Wild Horses: Photojournalist's First Amendment Right to Access: