The Supreme Court heard oral arguments today in United States v. Alvarez, the so-called "Stolen Valor" case.  The Ninth Circuit, in a divided opinion, held a provision of the act unconstitutional: 18 U.S.C. § 704(b), criminalizes false representations, verbal or written, that one has been "been awarded any decoration or medal authorized by Congress for the Armed Forces of the United States, any of the service medals or badges awarded to the members of such forces, the ribbon, button, or rosette of any such badge, decoration, or medal, or any colorable imitation of such item." 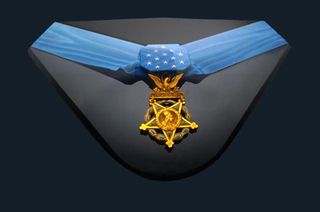 Taking the somewhat unusual step of deciding a case that would be resolved by a case already scheduled for oral argument, the Tenth Circuit weighed in on the issue last month, also in a divided panel opinion, but reaching the opposite conclusion.

The Solicor General argued for the concept of "breathing space" - - - imported from defamation doctrine as Justice Kennedy quickly pointed out - - - to be applied.   Justice Roberts also rather quickly posed one of the many slippery slope scenerios:

Kennedy later posed another one in rebuttal, and generally seemed unconvinced by the "breathing space argument": "The whole breathing space thing almost has  it backwards. It presumes that the government is going to have a ministry of truth and then allow breathing space around it, and I just don't think that's our tradition."  yet Kennedy quickly added, " On the other hand, I have to acknowledge that this does diminish the medal in many respects."

The issue of "harm" also preoccupied the argument.  The theory of the Solictor General (and Congress) is that those who have actually received medals are "harmed" because the value of the medals are diluted by false claims.  Justice Sotomayor seemed unconvinced that there could be harm without pecuniary interests or individual harm to reputation, but the Solictor general maintained that the "misappropriation of governmental conferral of esteem" caused "substantial harm."  In questioning Jonathan Libby, counsel for Alvarez, Justice Alito stated that the problem he had ith the argument was "determining which harms you think count and which harms don't count."

In discussing less restrictive means by which the government could accomplish its goals, Justice Scalia fancifully suggested a "Medal of Shame" for those who have falsely claimed the Medal of Honor, which Libby then distinguished from the more severe sanction of a criminal penalty.

Justice Ginsburg focused on the proposed amended Stolen Valor Act of 2011 that would criminalize false representations about medals  “with the intent to obtain anything of value.”  This led to a discussion of whether Alvarez would have been criminalized under that type of statute and what "a thing of value" would mean.  Justice Scalia suggested that having a crowd cheer for one would be a thing of value.  Then,

JUSTICE ALITO: Suppose what the person gets is -- is a date with a potential rich spouse. Would that be enough?
MR. LIBBY: Your Honor, I think when it comes -- when you get into the situation where you're getting something like a date, I do not know that -- I certainly wouldn't consider that a non de minimis thing of value, but -­
JUSTICE ALITO: Some people might have a different opinion.
(Laughter.)

The opinion of Alito generally seemed to be that Congress has broad authority to criminalize falsehoods, but the opinions of the other Justices seemed less clear.

Listed below are links to weblogs that reference Oral Argument Analysis in Stolen Valor Case: US v. Alvarez:

It would appear that the Justices, Courts, and/or the lawyers are missing that these medals do in fact have a value. MOH and PH receipants and dependents receive other benefits- like free education in some states, reduced real estate taxes, and medical care...to name just a few.