In what the First Circuit calls the "second chapter" of challenges to the constitutionality of Maine's registration and disclosure laws regarding election-related advocacy, the court in National Organization for Marriage [NOM] v. McKee, essentially reaffirms its opinion last August in a case by the same name (and now to be known as NOM I).   The cases stem from the hard-fought same-sex marriage ballot initiative in Maine in 2009.  NOM II involves both NOM and American Principles in Action [APIA], although the court expressed doubt regarding APIA's standing as to some of the claims, and the principle arguments revolve around NOM. 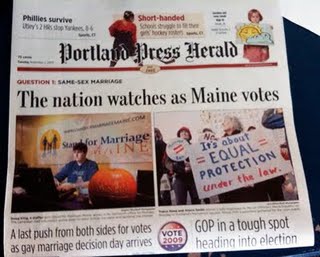 The unanimous panel decision, authored by Judge Kermit Lipez, focuses on the "only substantively distinct issue" raised by this appeal as contrasted to NOM I:  the constitutionality of the definition of "contribution" in the "ballot question committee" [BQC] provision, Me. Rev. Stat. tit. 21-A, §1056-B.  The court concludes that the BQC provision, like the PAC provision at issue in NOM I survives the constitutional challenge.

The court quickly disposed of the First Amendment claims, on the basis of NOM I, but paid more attention to the assertion that the term "contribution" was unconstitutionally vague as a matter of due process, and that any reliance on subjective beliefs of a contributor were likewise void for vagueness. At issue were email communications such as:

The panel found that Maine can constitutionally require parties to determine whether or not a "reasonable listener would understand their advocacy as an invitation to contribute to a specific ballot question campaign"- - - such as that in Maine - - - based upon the specific earmarking words of the solicitor, in this case NOM.

The court engaged in such reasoning after specifically faulting the appellants' attorneys for poor lawyering in terms of the as-applied challenges:

Appellants, however, do not address in their brief the vagueness problem with respect to donations received following any specific communication they distributed or proposed. Rather, they assert in conclusory language that subsections B and C of section 1056-B "are unconstitutionally vague as applied to most of Plaintiffs' speech." They make glancing reference to the content of the emails, noting that "some of NOM's solicitations mentioned Maine," and query whether, as a result of those mentions, donors' knowledge of the Maine ballot measure would be enough to make their donations covered "contributions" and NOM a BQC. They do not explain why they were unable, or would be unable, to link particular contributions received to their advocacy efforts on the Maine referendum, focusing their arguments instead on the language of the statute generally.

Thus, appellants are not only unable to bring a facial vagueness challenge to section 1056-B, but their failure to develop their as-applied challenges also would allow us to reject those claims summarily if we were so inclined. [citations omitted]. Given the importance of the issues raised, however, and the resources expended by all parties in this extensive litigation, we choose to explain why their vagueness contentions would in any event be substantially, if not entirely, unavailing. [citations omitted].

As the panel succinctly stated, it saw "no constitutional problem with expecting entities like appellants to make pragmatic, objective judgments about the nature of the contributions they receive where their own conduct and communications are the primary elements in the determination."

While NOM's attorney has reportedly vowed to take the case to the United States Supreme Court, there seems to be little here that would merit a grant of a writ of certiorari.

However, with the same-sex marriage issuepossibly again on the ballot in Maine in 2012, there may certainly be more litigation.