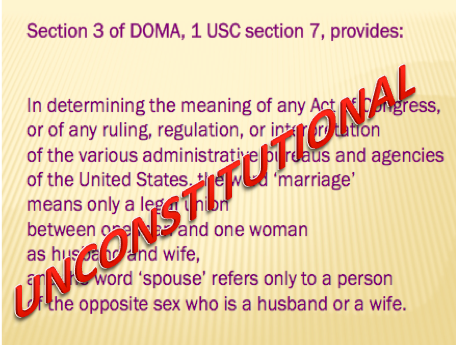 This time, the opinion comes from federal District Judge Jeffrey White in Golinski v. United States Office of Personnel Management.   Golinski is a staff attorney with the Ninth Circuit and in 2009 Chief Judge Kozinski ordered that Golinski's health benefits form listing her same-sex partner as wife be submitted by federal personnel authorities.  The DOJ since decided not to defend the constitutionality of DOMA and such actions are being defended by BLAG - - - the Bipartisan Legal Advisory Group of the United States House of
Representatives.

Golinski, a federal employee and described by the court as "a lesbian woman married under California law, who is unable to secure federal health benefits for her same-sex spouse," challenged Section 3 of DOMA as a violation of equal protection and due process under the Due Process Clause of the Fifth Amendment.  Under equal protection doctrine, the court looked at the "various factors" to determine the level of scrutiny the sexual orientation classification merited:

After finding that there was no definitive precedent regarding the level of scrutiny that should apply, and applying the factors, the judge specifically held "that gay men and lesbians are a group deserving of heightened protection against the prejudices and power of an often-antagonistic majority."

In applying the heightened scrutiny standard, the judge considered the animus expressed by certain members of Congress in DOMA's legislative history, the judge then analyzed the government's stated interests: responsible procreation and child-rearing; nurturing the institution of traditional, opposite-sex marriage; defending traditional notions of morality; and preserving scarce government resources.  For each interest, the judge concluded that that it did not "provide a justification that is substantially related to an important governmental objective."

The opinion then engaged in an "alternative analysis" under rational basis review - - - and also applied this to the BLAG's proffered additional hypothetical rational bases for passing DOMA:

With many references to Judge Tauro's 2010 opinions holding DOMA unconstitutional, Judge White similarly decided that these post-DOMA rationales do not satisfy rational basis.

Judge White's conclusion considers the broader issues, including separation of powers and judicial review, in context:

The Court has found that DOMA unconstitutionally discriminates against same-sex married couples. Even though animus is clearly present in its legislative history, the Court, having examined that history, the arguments made in its support, and the effects of the law, is persuaded that something short of animus may have motivated DOMA’s passage:

Prejudice, we are beginning to understand, rises not from malice or hostile
animus alone. It may result as well from insensitivity caused by simple want of
careful, rational reflection or from some instinctive mechanism to guard against
people who appear to be different in some respects from ourselves.

Board of Trustees of University of Alabama v. Garrett, 531 U.S. 356, 374-75 (2001) (Kennedy,
J., concurring).
This case was presented by an employee of the judicial branch against the executive
branch, which ultimately determined it could not legitimately support the law. The law was
then defended by the legislative branch. The judicial branch is tasked with determining whether this federal law is unconstitutional. That is the courts’ authority and responsibility. “It is emphatically the province and duty of the judicial department to say what the law is” and,where it is so, to declare legislation unconstitutional. See Marbury v. Madison, 1 Cranch 137, 177 (1803). As Supreme Court Chief Justice John G. Roberts said during his confirmation hearings: “Judges are like umpires. Umpires don’t make the rules, they apply them. ... it’s [the judge’s] job to call balls and strikes, and not to pitch or bat.” Confirmation Hearing on the Nomination of John G. Roberts, Jr. to be Chief Justice of the United States: Hearing Before the S. Comm. on the Judiciary, 109th Cong. 56 (2005) (statement of John G. Roberts, Jr.,
Nominee).
In this matter, the Court finds that DOMA, as applied to Ms. Golinski, violates her right
to equal protection of the law under the Fifth Amendment to the United States Constitution by, without substantial justification or rational basis, refusing to recognize her lawful marriage to prevent provision of health insurance coverage to her spouse.

Apart from the substance, Judge White's opinion is a model of organizational clarity.  For ConLawProfs looking for excellent opinions that demonstrate the organizational structure of equal protection doctrine, including alternative arguments, this is an opinion worth considering.

Listed below are links to weblogs that reference DOMA Held Unconstitutional - - - Yet Again: